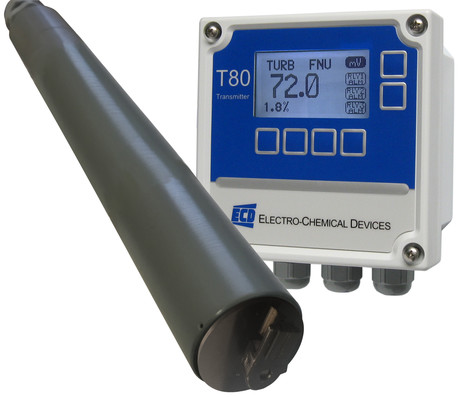 The Triton TR80 from Electro-Chemical Devices is a nephelometric turbidity sensor designed for use in water and wastewater.

Turbidity, the cloudiness or haziness of a water sample, is caused by particles suspended in the water, typically clay and silt. Since bacteria and viruses can be attached to these particles, turbidity has become a critical indicator of the overall water quality.

The Triton TR80 uses an optical method for determining the turbidity — a light beam is directed into the sample where it is scattered by suspended particles in the water. The amount of scattering depends on the amount of material in the water, the wavelength of light, and the size and composition of the suspended particles. The Triton TR80 uses a near infrared LED light source and the 90° scattered light method in accordance with ISO 7027/ EN 27027 to assure accurate turbidity values under standardized and comparable conditions.

The Triton TR80 sensors are available in four (4) diﬀerent ranges.

Designed for use in environmental, water treatment, or drinking water, the Triton TR80 is suitable for most aqueous applications. It is not suitable for use in organic solvents or in solutions with an extreme pH value, only use when the pH is between 2–12 pH. The temperature range for the sensor is 0° to 50°C.

TR80 Installation is accomplished with a 1″ stand pipe for immersion service, PVC ﬂow cell for an in line ﬂow through application, Valve Retractable, or De-Bubbler for Micro air bubble applications. Typically, applications of < 30 NTU range use a ﬂow cell or de-bubbler assembly and must be calibrated as an assembly with the sensor for best accuracy.

The optical surface must remain clean for accurate measurements. The sensor sensing face of the TR80 should be oriented so that the ﬂow of the water can clean and remove particles that could adhere to the sensor face. The TR80 incorporates an automated mechanical wiper design which can be programmed for frequency and duration. This can be utilized in any installation conﬁgurations such as: open tank using standpipes, immersion, pipe insertion and ﬂow cells. In all installations the sensor should be able to be simply removed for standard maintenance.

The Triton TR80 sensors are factory calibrated in formazine, NTU (Nephelometric Turbidity units) and are ready to use in most clean water applications. The factory calibration is permanently stored in the sensor’s memory and these values are also used for diagnostic purposes throughout the sensor’s life. Additional nonvolatile memory is used to log user initiated calibration data.

Reputable manufacturers will provide calibration certificates with instruments or sensors at the...

Environmental monitoring plays a key role in understanding, managing, and minimizing the impact...