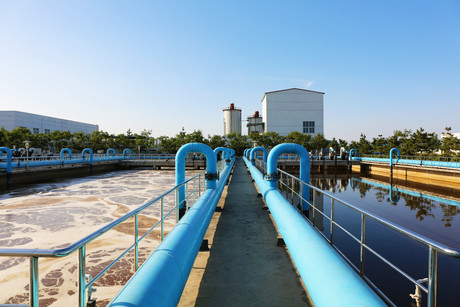 The Town of Billerica is located in Middlesex County, Massachusetts, and owns and operates the town’s wastewater treatment facility (WWTF). In 2005 a revision of the plant environmental discharge licence required the plant meet a more stringent monthly average limit of 0.2 mg/L total phosphorus (TP) and mandated that the plant undertake the required upgrades to achieve this within a four-year time frame. A number of options were evaluated but following successful pilot trials, CoMag® ballasted coagulation was selected as the preferred solution due to its ability to meet even more stringent future effluent targets down to 0.05 mg/L total phosphorus, deal with wide fluctuations in flow, influent phosphorus and total suspended solids all within a compact footprint. This paper explains how magnetite ballasted technology came to be selected and presents almost eight years of operational experience and performance data.

The Town of Billerica is located in Middlesex County, in the north-eastern corner of Massachusetts, USA. The town owns and operates the wastewater treatment facility (WWTF), along with all pump stations and collection lines. The original facility was constructed in 1966 with upgrades in 1975, 1982, 1984, 1988 and the CoMag ballasted coagulation tertiary treatment system in 2010. The Billerica influent stream is primarily residential with no significant industrial or commercial contribution and treated effluent is discharged into the Concord River.

Following revision of the facility’s effluent discharge licence, Billerica was required to improve the treatment plant’s total phosphorus removal capacity to meet a new discharge limit of 0.2 mg/L with the possibility of even lower TP limits in the future.

A range of process options were assessed, including converting the plant to an Enhanced Biological Phosphorus Removal (EBPR) process; however, this would still not be certain to achieve a future limit of 0.1 mg/L Total Phosphorus. For this reason the town decided a tertiary treatment solution was the best approach.

The CoMag system was piloted on-site in the summer of 2007, and successfully demonstrated the capability to comfortably meet the 0.20 mg/L permit limit with alum, polyaluminium chloride (PACl), ferric chloride or sodium aluminate coagulants. Additionally, the pilot demonstrated that future permit limits as low as 0.05 mg/L could also be met without the need for a polishing filter by simply increasing the coagulant dose.

As evidenced by Figures 1 and 2, the effluent TP limit of 0.2 mg/L was met throughout the pilot testing period, for both ferric chloride and alum. The pilot also demonstrated that if effluent TP limits were to be eventually reduced to as low as 0.05 mg/L, the CoMag system was capable of operating below this point without the need for post filtration. 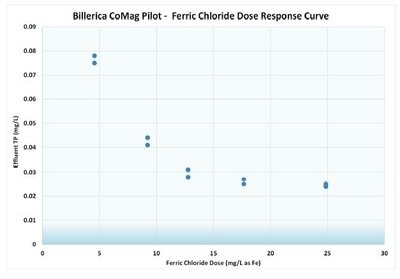 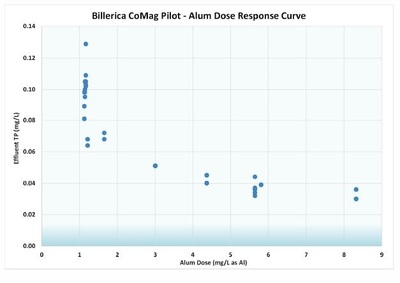 Another factor for consideration was the limited available space on-site, meaning a compact solution was preferable. Additionally, there were two existing unused concrete tanks that either needed to be demolished or repurposed and ultimately, it was the ability to repurpose these tanks, saving demolition and construction costs, coupled with the successful pilot trials, that led to selection of the magnetite ballasted CoMag system solution.

CoMag system is a high rate ballasted clarification process utilising chemical coagulation along with magnetite, a ballasting agent which becomes embedded within the chemical floc and provides rapid settling to enhance TP and TSS removal. The system process flow diagram is shown in Figure 3. 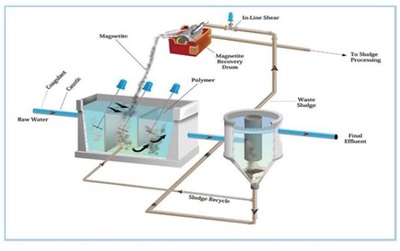 Influent flow is measured to pace coagulant and polymer, along with the recycle and waste rates. Coagulant and caustic for pH control is injected inline prior to the coagulation tank where conventional chemical coagulation/floc formation occurs. The resultant pH is measured at the inlet of the coagulation tank. Gentle mixing and a design HRT of 6 minutes at average daily flow allows for a stable chemical floc to be formed. The wastewater and flocs pass over a baffle into the ballast mix tank, where internally recycled sludge (which contains residual coagulant and polymer) and magnetite from the clarifier is re-used and recovered magnetite from the magnetic recovery drum is returned. The ballast tank has an HRT of 3 minutes at average daily flow. A VFD controlled mixer allows for the proper mixing energy to ensure magnetite embedment into the chemical floc without applying too much mixing energy and breaking up the floc.

Settled sludge is both wasted and recycled internally using a single centrifugal pump. Flow control valves, coupled with recycle and waste sludge flow meters, allow for recycle and waste flows to be flow paced or set manually. Waste flow is sent through an inline shear mixer prior to the magnetic recovery drum where the ballast is separated from the floc. The recovered magnetite from the magnetic recovery drum drops into a slurry tank and is pumped back to the ballast tank. Unballasted waste sludge from the drum flows by gravity to a gravity sludge thickener where it is blended with the facility’s other primary/biological/chemical sludge. The combined sludge is then dewatered using a rotary sludge press.

Magnetite is hydrophobic and has a specific gravity of 5.2, which substantially increases the settling rate of the chemical floc. By increasing the settling rate, the magnetite ballasted process requires a smaller footprint to treat equivalent flow rates when compared to conventional systems.

An integral part of the process that enables it to high quality effluent with a lower coagulant and polymer dose than alternate processes is the ability to internally recycle the ballasted sludge without breaking up the floc. This enables the system to:

The design basis for the full-scale magnetite ballasted tertiary system is presented in Table 2.

Based on the pilot plant results, the Billerica WWTF decided to use alum as their coagulant. The average CoMag system alum dose during this period was 3.0 mg/L as Al. The full-scale Billerica system was “charged” with magnetite and started up for the first time on 7 September 2010. The system had a successful start-up and began meeting the effluent TP limit within minutes after initial coagulant and magnetite addition. The system was then allowed to come into equilibrium overnight; equipment check outs, process optimisation and effluent testing began the next day.

The test results from the first 33 effluent TP tests conducted during the 2-week optimisation and adjustment period are illustrated in Figure 4. The system responded exactly as designed and generated results were well below the effluent total phosphorus monthly average limit of 0.20 mg/L. Effluent TPs were stable and ranged from 0.036 to 0.12 mg/L (0.055 mg/L average). 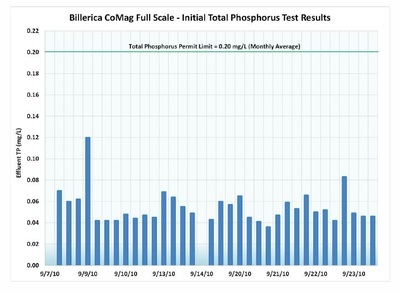 Immediately after the process optimisation and adjustment phase described above, the CoMag system was deemed ready for the formal performance acceptance test phase. However, the effluent TPs generated during the initial start-up phase were significantly lower than those required for the performance tests and the process settings were ‘detuned’ to produce higher effluent TPs, but still remain comfortably below the permit limit of 0.20 mg/L. Formal performance and acceptance tests were conducted over 15 days. The objective of these tests was not to generate the lowest possible effluent TPs but to demonstrate a reliable level of performance consistency with effluent TPs below the permit limit and achieve an average effluent TP target of <0.10 mg/L. 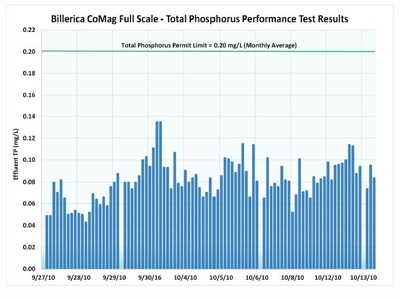 On many days during these tests, the CoMag system was subjected to several influent flow surges when the feed flow increased by a factor of three during the course of less than 1 minute without serious impacts on the CoMag system effluent quality. These surges were caused by instrumentation control issues in the WWTF main pump station that feeds the CoMag system.

Figure 6 displays monthly average effluent TPs for 2014 through 2018 and illustrates the wide range of capability generated by blending flows during the winter. The tertiary CoMag system also produced significant further reductions in secondary effluent BOD and TSS. The average additional BOD and TSS reductions during this period were 59% and 38%, respectively. The average daily flow during this same period was 14.3 MLD. 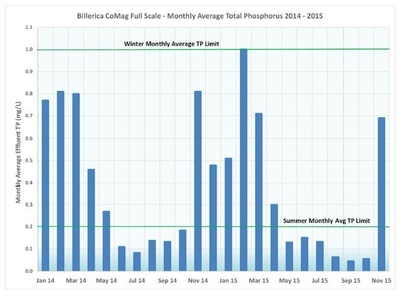 Manpower requirements are minimal and less than 30 minutes per day. Prior to the installation of the CoMag system, the WWTF was staffed 24/7 with three shifts. After the CoMag system came online and demonstrated its reliability, the WWTF began operating only with a day shift.

The average Billerica CoMag magnetite consumption rate has been 25 pounds per day. Based on an average daily flow of 14.3 MLD, this is equivalent to 7 pounds of magnetite, ie, less than a shovel a day, consumed per million gallons treated. Plant staff monitor the CoMag sludge recycle pumps for any signs of seal or impeller wear. The process has been running continuously since September of 2010 and as of January 2018, these pumps have been performing dependably with no signs of wear or abrasion.

The Billerica, Massachusetts WWTF magnetite ballasted CoMag system has proven to be a reliable and versatile tertiary treatment option that has the capability to be dialled in to achieve any effluent TP target down to <0.050 mg/L, while also achieving significant reductions in TSS, BOD and other contaminants. The system has provided Billerica the flexibility to meet and exceed both current and any future total phosphorus permit discharge limits.

This paper was presented at AWA’s Ozwater 2018 conference, which was held in Brisbane in May.

The Triton TR80 from Electro-Chemical Devices is a nephelometric turbidity sensor designed for...

Chris Hoey shares details about Bürkert Australia's 40-year history, its ethos and how...

Call for mining regulations in Myanmar after fatal landslide