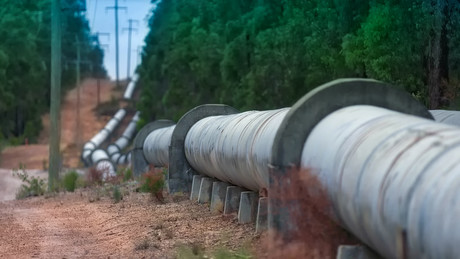 When TRILITY considered developing a new water treatment plant near Perth in 2010, its team of executives and number crunchers sat down in the Company’s Adelaide head office to assess a proposed 37-year contract to design, build and operate the 240 ML per day facility.

Yet the Company’s Asset Manager, Matt Gulliver, was thousands of kilometres away, walking through the West Australian bushland. The manager whose job it is to determine how much TRILITY and its partners should bid to build, refurbish and maintain a project serving WA’s parched Goldfields region was in hiking boots, shorts and a hat trekking along a 5km section of pipeline fundamental to the operation of the WA facility.

“I needed to see the asset,” Gulliver says today. “I needed to get a feel for it well beyond a desktop review and understand what we were committing to before we submitted the tender.

“Walking the length of that section of water pipeline not only helped me shape our offer but I also found a leak which I duly reported to the prospective client before heading back to Adelaide.”

TRILITY would go on to lead a consortium to deliver the $300 million project and, seven years on, the facility is running at optimum levels. For Matt Gulliver, building an understanding about the full life cycle of a facility and its operation is at the core of the asset management challenge. 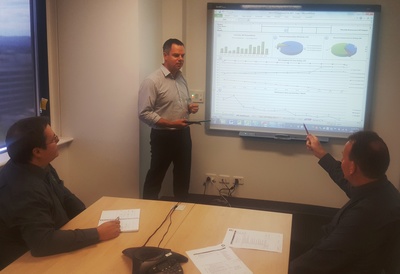 “We have challenges at the design and procurement stage across most projects, primarily around whole of life costing,” he says. “It’s not widely appreciated that the majority of the asset’s cost over its life is set as soon as the designer draws the asset on a drawing.

“Another major challenge is at the end of the asset’s life, where decommissioned assets need to be maintained to keep them safe and there’s usually no money or interest in this.

“Or the many ageing assets, such as the majority of Australia’s water pipelines that were installed in the 70’s and 80’s and are now nearing end of life.

“And then there are all sorts of challenges in-between.

“At its core, asset management is about looking after assets to ensure that they perform as required. TRILITY must know what assets it has, where they are, what condition they are in, how they are performing and have clear and costed plans for their future that include both maintenance plans and renewal or refurbishment plans.

“Ensuring that the asset performs to the required service level is key and doing that at the lowest life cycle cost is now imperative,” Gulliver says. “Gone are the days of just following the original equipment manufacturer (OEM) manual, or creating preventive maintenance tasks as knee jerk reactions to issues or budgeting purely based on historical costs.

“A robust, transparent and repeatable process is the expectation — from the client to the regulator. And the customer wants the lowest cost service with the highest reliability and quality.”

Gulliver spends a week each month out on TRILITY sites. The Company’s operations extend across Australia and into New Zealand, and it runs an Asset Management Team out of regional locations as well as head office in Adelaide. Sites in Berri in South Australia, Townsville in Queensland and Ballarat in Victoria deliver asset management services to the company’s operations nationally.

Then there are the tools that are needed to deliver the “robust, transparent and repeatable process” Gulliver and his team oversee at TRILITY. New and improved asset management tools are being steadily integrated into day to day operations for TRILITY” — and he utilises a surfing analogy to describe the changes underway.

“The ‘swell’ around using big data, predictive analytics and the internet of things is really starting to grow,” he says.

“TRILITY has been experimenting in this area for the past five years and has made solid advances in the last 18 months. The advance has come from a maturing in the ‘swell’ and its direction is better understood.

“We now have a MOMS refresh underway and a number of ML projects underway and we’re now able to ‘read the waves’, choose which wave to ‘catch’, be ‘paddling’ so we’re ahead of the ‘wave’ and not just ‘riding’ it or being ‘wiped out’.”

TRILITY’s SAP system also plays a key role in daily business of the Asset Management Team. SAP was deployed across TRILITY in 2012 and Gulliver’s team is seeing the benefits of the architecture behind modules such as Plant Maintenance including, in his words, “the right level of granularity of our data, as well as the right practices in the field”.

“By linking purchase orders to work orders, we now have well over twice the amount of work order history,” he says. “We also have good behaviours in terms of raising the right type of work order for the job.”

“There is now a benchmark to compare your asset management system to ‘best practice’,” he says. “Some commentators have written that ISO55001 will have ten times the impact of the quality standard, which is ISO9001.

“This analysis suggests that institutions such as banks and insurance companies will now ask your business to be accredited to receive lower premiums.”

“Choosing the right KPI’s to ring the right alarm bells and having the right data to be able to produce these KPI’s is critical,” he says. “Using the famous saying ‘what is not measured is not improved’, we measure and discuss these results regularly with all our teams around Australia.

“And, ultimately, we see the improvement.”

Reputable manufacturers will provide calibration certificates with instruments or sensors at the...

Environmental monitoring plays a key role in understanding, managing, and minimizing the impact...