The sewage treatment plant in the city of Gütersloh, Germany, treats an average of between 6.5 and 7 million m3 of sewage water. Up until recently, three Atlas Copco ZB 130 VSD centrifugal compressors and two older single-stage screw compressors supplied the compressed air for the biological process that occurs in the plant’s exceptionally deep sedimentation tanks.

“The biological process takes place in eight tanks that are subdivided into four lines,” explained sewage water technician Reinhard Schweinforth. The tanks are 10 m high with a water depth of 8.5 m - unusual dimensions for sewage treatment plants, noted Schweinforth, which are normally 4 to 5 m deep. The air required for the biological cleaning process is blown into the eight tanks from below via diaphragm tube aerators - an energy-intensive process that accounts for 40% of the plant’s entire power consumption. 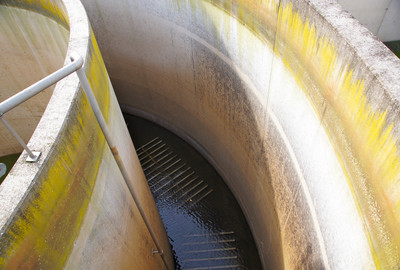 The five single-stage screw compressors which provided the compressed air needed to be completely overhauled at great cost, so the search for a new energy-efficient solution began. Centrifugal compressors with magnetic bearings were deemed to be the best option because a comparatively high pressure is required for the exceptional depth of the tanks.

“We have purchased the new compressors with the aim that the machines will now be more energy efficient and easy to maintain,” said plant manager Karl-Heinz Schröder. “Now that we are using the centrifugal compressors from Atlas Copco, we are saving around €15,000 each year on maintenance, energy and resources compared with screw compressors.” 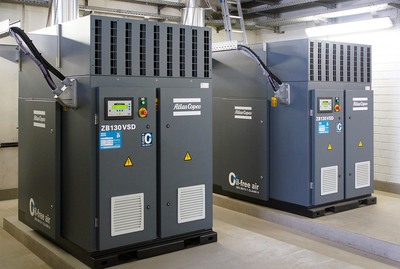 The three speed-regulated centrifugal compressors generate between 2500 and 7500 Nm3 of oil-free compressed air per hour, depending on the amount of sewage water and the polluting load. The interaction is engineered by the ES 130 master control system from Atlas Copco. The process control system determines the air requirement on the basis of the oxygen content in the tanks.

COVID-19 vaccine: who's in the running?

Reduced-sugar chocolate: all about the ratios