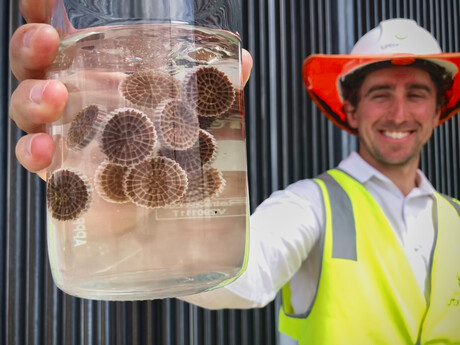 In an exciting milestone for the waste industry, Urban Utilities and Veolia have unveiled a full-scale sidestream plant that uses anammox bacteria to treat wastewater.

Reported to be the first of its kind in the Asia–Pacific region, the treatment facility at Queensland’s Urban Utilities’ Luggage Point Resource Recovery Centre uses Anita Mox technology to naturally remove ammonium and nitrogen from sewage via anammox, or anaerobic ammonium oxidation.

Organic nutrients like ammonium and nitrogen must be removed from sewage to protect the quality of waterways to avoid toxic algal blooms in the environment. Traditional sewage treatment processes produce a by-product called centrate, which is rich in nitrogen and ammonium and needs to be returned to the head of the plant for further treatment.

“Using the sidestream plant, the anammox bugs naturally remove the ammonium and nitrogen, requiring less energy for aeration and eliminating the need to add carbon,” he said. “By using less energy and chemicals, the anammox creates a more efficient treatment process.

“The process will save around $500,000 per year in operational costs and boost capacity at the Luggage Point plant, which treats around 60% of Brisbane’s sewage — the equivalent of around 50 Olympic swimming pools — every day.”

Urban Utilities has spent 10 years researching and farming the slow-growing anammox bugs at the Luggage Point Innovation Centre to have enough to use in the sidestream plant. Todhunter said the most exciting part of the milestone is that the completion of the plant means other wastewater utilities in Australia can have instant access to anammox bugs if they’re looking to implement the same innovative technology.

“We’ve finally grown enough bugs to introduce them into the treatment process and start reaping the benefits, as they’re very efficient at removing ammonium and nitrogen from sewage,” he said.

Veolia Water Technologies’ General Manager for Projects, Michelle Moroney, said farming the anammox was one of the most time-consuming parts of the process.

“Due to biosecurity laws, you can’t import anammox bugs into Australia so it’s taken a long time to grow them for this project,” she said. “The plant will operate as a biofarm, which means other wastewater utilities can have instant access to seeded carriers if they’re interested in using the technology.”

Moroney said the bugs grow on special disc-shaped carriers in the AnitaMox process, which is one of the other reasons the technology is unique.

“The carriers provide a home for the biofilm to grow on and they’re a critical part of the process,” she said. “Around 500 m3 of carriers were craned into the sidestream tanks at Luggage Point.”

The sustainabability of recycling technology should not be assessed by the quality of its...