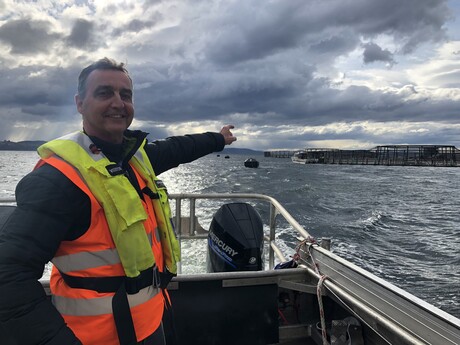 In recent decades, world population growth has outpaced the growth in land-based agriculture. At the same time the use of aquaculture has grown: world aquaculture production has risen from 7% of fisheries to 40% worldwide since the 1980s, according to Deloitte.1 The growing demand for farmed seafood has led fisheries to adopt increasing levels of automation to help the industry grow and increase efficiencies, while minimising environmental impact.

Established in 1986, Huon Aquaculture has grown to become a salmon producer that is recognised around the world for the quality of its produce and the ingenuity of its operations.

The company is seen as an ethical business and a respected Tasmanian brand — part of a sustainable industry and a company that is focused on the safety of its employees, as well as the welfare of the fish and the wildlife around its farms.

Huon Aquaculture is fortunate to farm in Tasmania’s healthy marine environment, allowing them to raise salmon and ocean trout in locations best suited to optimal growth. From the time their fish start their life in hatcheries, up until they are harvested, their environment plays a vital role in their health, growth and quality.

Huon is a fully vertically integrated company, meaning that the company does everything from selectively breeding brood stock for egg production, to processing salmon ready for the consumer.

Huon’s Storm Bay lease has the roughest farmable waters in the world. Located at the mouth of Tasmania’s Derwent River and opening south towards the wild Southern Ocean, Storm Bay can regularly experience swells of 4–6 metres significant wave height. While these conditions can be dangerous for people, Huon has found that the swells regularly rolling through the pens is good for the fish as it closely mimics their natural habitat. It also means that the pens can be left fallow for a shorter time before restocking.

However, the rough seas are also one of the reasons that Huon embarked on a journey to find a way to reduce or eliminate the need for people to be manually operating feed barges in such rough and dangerous conditions. Huon looked into mirroring what companies were doing around the world, where they were controlling their processes from a centralised location.

A major reason for automating fish feeding is the desire to maximise the consistency of the size and weight of the salmon at harvesting. Huon’s pens are, according to Peter Bender, Chief Executive Officer and Managing Director, the largest ocean fish pens in the world, with circumferences of around 240 metres and holding over 100,000 fish. With manual feeding, there can be days when fish are fed less and days when they are overfed — and uneaten fish pellets fall to the ocean floor, which is not only wasteful, but pollutes the ocean floor environment.

Moreover, without an even distribution of feed, the result can be an inconsistency in fish size, as the larger fish continue to dominate and consume the most, while others remain small.

As a result, Bender went to an exhibition in Europe, only to realise that none of the software displayed was going to be fit for purpose for Huon because of the way they feed and their stocking densities. Many of the systems were designed for feed pens close to shore, and not up to 50 km out to sea, exposed to the Southern Ocean.

The company realised that an out-of-the-box program was not going to meet their needs, so they knew they had to work from the ground up. The company’s aims were to:

The challenge was therefore to develop new technology and implement it on a larger barge that could be moored at sea for longer periods without replenishment.

Commissioned and launched in December 2018 by Tasmanian shipbuilder Crisp Bros. & Haywards, Hogan is the first of two 600-tonne feed barges that will be used to manage the pens in Storm Bay. The sheer size of the barge is a result of it needing to not only withstand the sea conditions in Storm Bay, but also to remain autonomous for larger periods of time — both for feeding and waste recovery activities. 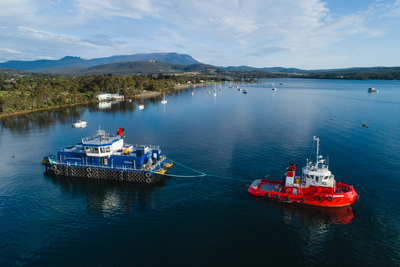 The significance of the barge is not so much due to its size, however, but due to its technology. Those staff that were once fish feeders are now control room operators and feed every fish in every pen from a control room in Hobart. They are able to do this as each pen has cameras that send real-time footage and data back via the barge to the control room. A pellet detection system that utilises artificial intelligence coupled with a remote controlled on-water feed delivery system makes feed delivery more effective than previous manual feeding.

The pellet detection system can detect as few as two uneaten feed pellets in the water column beneath the fish, and can automatically slow or shut off the flow of feed when the fish have stopped feeding — matching the feeding to the appetite of the fish while reducing wastage and potential impact to the sea floor.

In addition to the pellet detection system, Huon also developed a feed delivery system that spreads the feed evenly across the surface of the pen, by effectively ‘spraying’ it from a central point. This ensures that the fish have an equal chance of receiving feed — resulting in a consistent 5 kg fish size at harvesting.

For the control system on the barge, Huon engaged Cromarty Pty Ltd, a specialist automation system engineering and design firm. Cromarty provided all the electrical and control system design. The design work was done over an 18-month period. 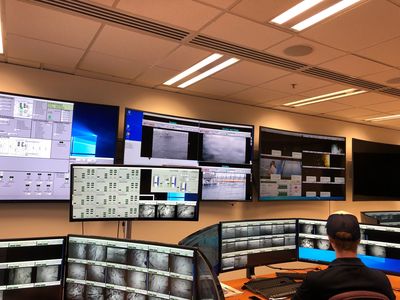 “When we were asked to get involved in the building of the barges, it was identified that there wasn’t a proper specification of the valves to be used for the various processes on the vessel,” said Andrew Palfreyman of Cromarty. “Basically the valves chosen were not up to the task of working reliably in the harsh and corrosive conditions expected.”

Andrew encouraged Haywards to contact Katherine George, Managing Director of Total Instrument Controls, to assist in specifying the right type of valves to be used in the elements of the Southern Ocean.

Total Instrument Controls are a supplier of instrumentation and control technology and are one of the leading Australian resellers of Bürkert’s valve systems and controls. Previously the company had supplied Huon Aquaculture with various Bürkert equipment for their hatcheries, including solenoid valves and actuators, as well as oxygen dosing systems. 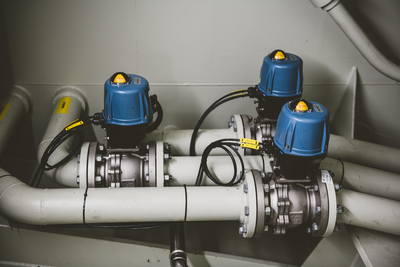 “The various valves from Bürkert that we supplied for the project have a variety of tasks from moving fluids (air, water, fuel etc) around the barge, as well as controlling the feed spreader systems, deck wash systems and generator fuel shut-offs,” Katherine George said. “Any valves in contact with salt water use a particular grade of stainless steel called Duplex for the trim material, as it provides the best corrosion resistance.” 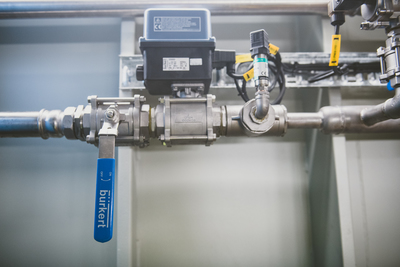 “Bürkert’s 3005 actuators with battery backup on top of butterfly valves and stainless steel ball valves were chosen. Battery backup was chosen to implement failsafe functionality in case of power loss or loss of communication to the barge,” he added. “Battery backup was a must as many of the valves have the potential to sink the barge in stormy weather if they are stuck open, allowing the seawater to continue to enter the vessel.”

The huge barge, the remote control and the innovative feed system are all achievements that Huon Aquaculture and its suppliers can be proud of. But the crowning achievement is possibly the artificial intelligence and machine learning that has been incorporated into the control system.

Rather than relying on human operators observing the video feed, as is done in European systems, Huon has a achieved a system that uses the latest in AI and machine learning to automatically respond to fish behaviour, and can ‘learn on the job’. Managing Director Peter Bender believes the system may well be the first of its kind in the world — a world-leading innovation built on Tasmanian ingenuity.

In an exciting milestone for the waste industry, Urban Utilities and Veolia have unveiled a...