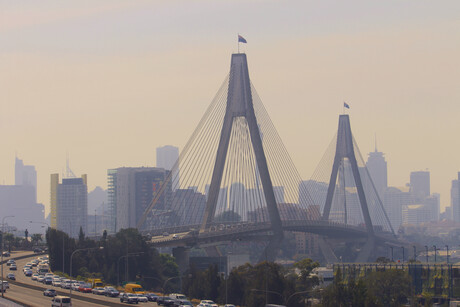 “One of the major problems in the built environment is urban overheating, or regional climatic change,” said Mattheos (Mat) Santamouris, Anita Lawrence Professor of High Performance Architecture at the University of New South Wales.

“As our cities heat up, heat-related morbidity and mortality rise,” he said. In 2020, 593 and 391 people died from heat-related deaths in Melbourne and Sydney respectively, a substantial increase from 289 and 176 in 2007, according to the Australia State of Environment.

To combat this issue, UNSW Sydney and the University of Sydney have teamed up to create building materials — super cool roofs, pavements and coatings for buildings — that reflect rather than absorb solar energy.

They can reduce peak temperatures in our cities by up to four degrees, enough to save lives, Professor Santamouris said.

Super cool roofs and pavements by contrast reduce the energy needed for cooling. This in turn decreases carbon dioxide emissions that increase the magnitude of climate change. This makes our cities more economical, environmentally friendly and livable, he said.

The new-generation materials were tested as part of a study to reduce temperatures in Australian cities, mainly in the frame of an ARC Discovery Project.

The study found that introducing super cool materials with other heat-mitigating strategies, such as increased greenery and shade, could save around 10 lives per year per 100,000 residents.

“Under the sun, [with] 42 degrees ambient temperature, the [super cool] materials’ surface temperature was 25. It’s a natural air conditioner without expending any energy — super cool materials,” the energy physicist said.

“And all these new technologies and new materials have been developed here in Australia.”

Professor Santamouris and his team are partnering with the Department of Industry, Science, Enterprise and Research (DISER) on two projects to promote energy efficiency in the built environment.

The team will provide cost-benefit analyses and scientific documentation on the adoption of cool roofs in Australia, and ways to improve energy efficiency in new and existing commercial buildings, such as office buildings, aged-care facilities, hotels, childcare centres and shopping centres.

With around 40% of the total energy consumption in developed nations attributable to buildings, there is huge potential for impact, Professor Santamouris said.

“The reduction of energy use and associated greenhouse gas emissions through energy conservation measures is vital to achieving energy and climate goals in the cities,” he said.

Professor Santamouris is applying his research to reduce temperatures in Riyadh in Saudi Arabia, one of the world’s hottest cities. The Royal Commission of Riyadh has engaged his team to develop an all-pervasive heat-mitigation plan, the largest of its kind.

The team is coordinating similar studies for the cities of Dubai, UAE; Kolkata, India; and Kuala Lumpur, Malaysia, in collaboration with local researchers.

Professor Santamouris is ranked the top most cited scientist for building and construction globally for 2019 and 2020 in the Meta-Research Innovation Center at Stanford. He and his team are involved with more than 200 large-scale heat-mitigation projects around the world in Europe, the Americas, Asia and Australia.