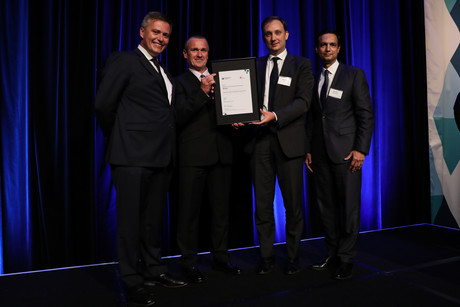 In 2005, the WA Government awarded SUEZ the contract to build the plant alongside Multiplex and construction began almost immediately. The plant delivered its first water within 18 months and achieved fully operational status only six months after that.

Once holding the status of the largest seawater reverse osmosis desalination plant in Australia, the plant currently provides around 45 billion litres of safe drinking water per year — around 18% of Perth’s total water supply. SUEZ was recognised at the awards for excellence in the ongoing delivery of service and management of operations of the plant for Water Corporation.

“Our job has been simple — to provide a safe, reliable and cost-effective water service for our client and the residents of Perth,” said David Lamy, CEO – water & treatment solutions at SUEZ. “We’ve been proudly doing that for more than a decade and this award recognises the team’s efforts in striving for operational excellence every single day.”

The award judges noted that the PSDP is one of the most cost-effective desalination plants in Australia and acknowledged the team’s enviable safety record, which surpassed 4000 lost-time-injury-free days this year.

“We look forward to continuing our work with Water Corporation to continue to provide a reliable and cost-effective water supply that households, businesses and farming areas can rely on well into the future,” Lamy added.

Sydney Water is transforming its supply chain and finalising a new delivery model for all water...