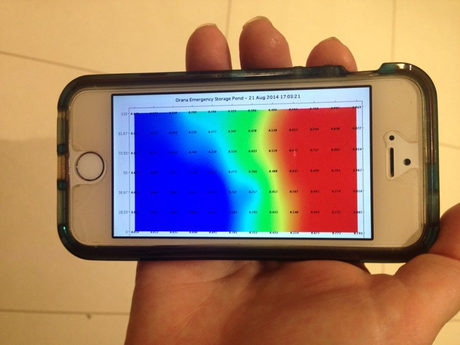 South Australian company Zonge Engineering created Liquid Integrity Systems after it was asked by a coal seam gas supplier in Queensland to develop something to help it meet its EPA guidelines.

Its wireless solar-powered electronic leak detection system features electrodes that sit on or below the pond liner. An electrical current runs through the electrodes once a day to detect leaks.

Changes in the current are mapped to pinpoint leaks, which can be detected down to breaches as small as one millimetre.

The standalone cyclone-proof control box on the side of the pond sends the daily results remotely to a smartphone, tablet or a computer.

The device also measures pond telemetry including temperature, depth and salinity. Systems can be installed at the time of pond construction or retrofitted to an existing pond.

“Most current systems don’t have anything like that, they have bores around the edges that might be checked every so often,” Zonge Engineering Managing Director Kelly Keates said.

“But the issue with that is it’s not giving immediate results and also not finding out what potentially is leaking straight down.

“Our system will reduce potential pollution to the surrounding environment with instant detection so pond owners can act immediately.

“Our vision is to change the reliability and community trust of liquid waste facilities and create a new way to improve environmental compliance and best practice for the future.”

Adelaide-based Liquid Integrity Systems has so far installed four systems in coal seam gas ponds in Queensland but is also building demonstration models for use in gold and copper mines in Western Australia.

The technology is applicable to any new or existing lined liquid or solid waste facility including tailings dams.

Keates said while it had so far been targeted at the mining industry, the device could also be used for holding ponds in the wastewater, agriculture and wine industries.

“It’s a unique system that can help protect the environment and is more cost-effective than the current systems,” Keates said.