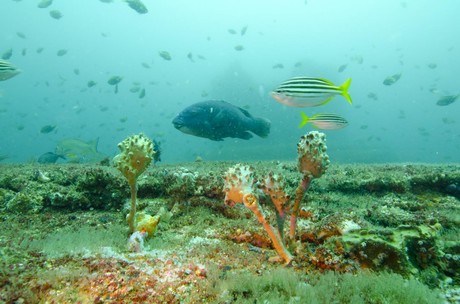 A team of researchers has discovered that the Sydney Desalination Plant is attracting some species of fish, which are increasing in numbers at the plant’s discharge site.

With findings reported in Environmental Science & Technology, the researchers are investigating the ecological effects of discharging excess salt back into the ocean as hypersaline brine. Specifically, Brendan Kelaher and his colleagues are investigating how the hypersaline discharge impacts reef fish community structure and abundance.

The Sydney Desalination Plant commenced operations in 2010 to improve water security and now supplements Sydney’s water supply with up to 250 million litres per day. During operation, the plant releases hypersaline solution from two outlets above a rocky reef about 300 m offshore and about 24 m below the ocean surface.

The researchers used scuba divers to take videos of fish at the outlet sites and at multiple reference sites over a seven-year period before and after the desalination plant’s operation, as well during a timeframe when the plant temporarily ceased operations.

Fish, including some commercially important species, were three times more plentiful around the outlet during hypersaline discharge than before or after. The largest increase was observed for fish such as the one-spot puller, which feeds on zooplankton. These differences were not observed at the reference sites.

Because local changes in sea-water salinity and temperature were relatively small following hypersaline discharge, the team says that the turbulence caused by the high-pressure release of the salty solution could have attracted the fish.

The researchers advised that careful regulation of fishing around desalination discharge outlets might be needed to prevent local depletion of fish populations on the broader reef complex.

Image caption: More fish assemble near an outlet of the Sydney Desalination Plant during the discharge of a hypersaline solution than before or after discharge. Image credit: Mclennans Diving.

This WIOA water industry event is being held from 23–24 February at the Bendigo Exhibition...

Water senstive cities advocate Lisa Currie is one of three water leaders in New South Wales to be...

Sydney Water is working on several solutions to meet population demands and ensure a secure water...