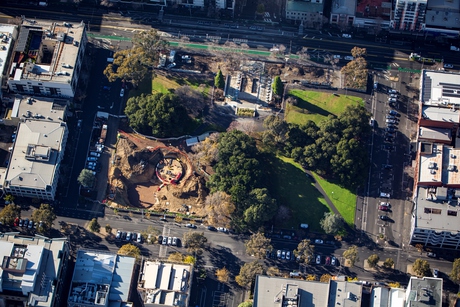 The City of Melbourne is working with the Victorian Government to install Australia’s first combined stormwater harvesting and flood mitigation tank to protect against flooding in Melbourne’s CBD.

Lord Mayor Robert Doyle said the $3 million underground tank, to be based in Lincoln Square, Carlton, is part of an overall program of works that will help to reduce the flood risk in Elizabeth Street from Extreme to High.

“Elizabeth Street was once a creek that flowed into the Yarra River, so it has been the site of major flooding throughout Melbourne’s history,” the Lord Mayor said. These floods have over the years left thousands of people homeless (1891, 1934), caused dozens of deaths and injuries (1934), submerged cars (1972) and disrupted public transport (2011).

“By installing a two million-litre tank at the top of the catchment, we can reduce rainwater collecting around Flinders Street Station, which is one of the busiest areas in the central city,” the Lord Mayor said.

“The system relies on new technology which allows the water to be either purged or recycled based on the weather conditions.”

The tank will collect stormwater from surrounding areas of Parkville and Carlton via the Bouverie Street drain next to Lincoln Square, one of three heritage squares that were set out in the 1850s. It will be Australia’s first combined flood mitigation and stormwater harvesting project.

“The water tank is larger than an Olympic swimming pool and will save thousands of litres of drinking-quality water a year,” the Lord Mayor said. “We will harvest this water to keep Carlton’s heritage squares lush and green during Melbourne’s long hot summers.”

“We manage 480 hectares of parkland across the city, so it’s important that we use water wisely to protect our iconic gardens from drought and extreme weather conditions,” added the chair of council’s Environment Portfolio, Councillor Arron Wood.

“Exciting projects like this will help us to reach our target of sourcing 50% of our water from non-drinking sources in the coming years.”

Excavation works to install the tanks are currently underway and are expected to be completed by September.

The VEGAPULS WL S 61 radar sensor is designed for all simple applications in the water supply and...

Have you been introduced to the unique MicroPurity™ technology of the Zip HydroTap®?

From Byron Bay to the UK, Extraordinary Foods is going global