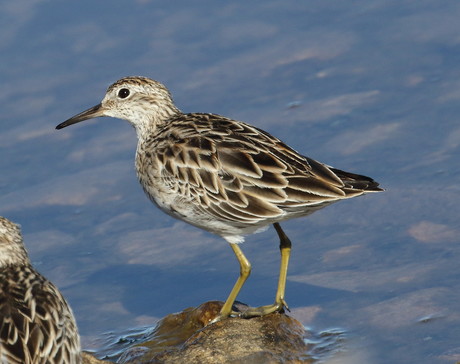 Thousands of migratory shorebirds and Australian ducks seek refuge at the Bolivar Wastewater Treatment Plant in South Australia, according to research undertaken by Birds SA in collaboration with SA Water. The migrating birds use the plant’s private 500 ha treated water polishing lagoons as a source of habitat and food.

Since 2018, conservation studies have discovered thousands of ducks and up to 16 different species of shorebirds at the site, including 10 summer migrant species from the Russian Arctic.

Northern shorebird species recorded at Bolivar have included at least 2000 sharp-tailed sandpipers feeding in the area, with pelicans and several species of cormorants, grebes and ducks diving for fish.

SA Water Senior Manager of Wastewater and Environmental Expertise James Crocker said with the ponds teeming with fish, yabbies, insects and plants, they provide a perfect refuge for these birds.

“Bolivar plays an extremely important role in safely removing and treating wastewater for thousands of our customers around Adelaide, but many may not be aware of how beneficial the site is for the natural environment too,” Crocker said.

“It’s exciting to see the positive environmental impact the site’s treated water ponds are having on the natural world, and we want to ensure that Bolivar can remain an important conservation refuge site well into the future.”

One of the final stages of the sewage treatment process, Bolivar’s large water lagoons store millions of litres of treated wastewater for approximately two weeks, allowing it to be naturally ‘polished’ before it’s used for irrigation or returned to the environment.

“Unfortunately, we are continuing to see shorebird numbers decline, which makes Bolivar critically important in offering a healthy and safe place for many species to thrive,” Professor Breed said.

“Our results so far have been impressive, with over 10,000 ducks sighted at the plant on several occasions along with larger fish-eating species like terns as well as raptors, with sightings of the rare white-breasted sea eagle on two separate visits; a species which is listed as a vulnerable in South Australia.

“Nearly half of the shorebird species that we have observed at Bolivar breed in the Northern Hemisphere and return to South Australia after the end of their breeding season, so we’re hoping to see more species as our summer approaches.

“Our observations change depending on the time of year, with ducks seemingly more abundant when the treatment ponds are full, while shorebirds come in larger numbers when the water levels drop.

“We will continue to record and photograph these beautiful birds and use our data to compare Bolivar with other wastewater treatment plants across the country.”

Australian and global businesses are making a shift towards automation and remote...