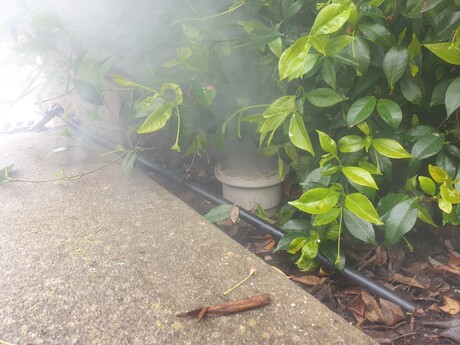 SA Water is set to begin discharging small amounts of artificially generated smoke into Naracoorte’s sewerage network to test for any incorrect or illegal stormwater connections as well as broken or cracked sections of pipe.

The commonly used method will help SA Water identify where stormwater is entering the sewers, which can contribute to overflows following a heavy rain event.

After putting the smoke into the network, the utility will look for escape points such as stormwater downpipes on the side of a building’s roof guttering, or from the road surface of a broken inspection point lid.

Peter Seltsikas, Senior Manager of Capital Delivery, SA Water, said Naracoorte was selected for this testing due to the high number of sewage overflows at the local treatment plant’s pump station after heavy downpours.

He says that SA Water is taking a proactive approach to identify sources of intrusion after monitoring indicated there may be points in the network receiving excess stormwater after rain. Though a level of stormwater infiltration is normal, recent events have overwhelmed Naracoorte’s network and significantly raised the volume and flow of sewage.

“The increased flow also elevates the risk of overflows to the environment or onto a person’s property and we want to help minimise the chance of this to ensure our sewers are able to continue protecting public health,” Seltsikas said.

Information gathered during the inspections will inform a range of solutions, such as repairs or remediation options for local property owners.

“We appreciate that some people may not be aware they have an illegal stormwater connection on their property, but it’s important the issue is rectified to reduce the risk of overflows and keep our sewers healthy,” Seltsikas said.

The odourless, grey smoke, similar to that used at concerts or for special effects, is harmless to people, plants, animals and the environment. It does not stain and it dissipates within a few minutes.

The inspections will take place between 7 am and 5 pm each day until Thursday, 8 December.

SA Water has informed the local community and the Country Fire Service of the work. It may require access to easements along the roadside, as well as driveways and front yards.

“There will be no disruption to our local customers’ sewerage service as a result of the work, and they can keep using taps and other plumbing fixtures as per usual, as smoke won’t come out where there is a water seal, such as in a toilet,” Seltsikas said.

Waste to energy: fats, oils and grease to power homes

Food scraps, wastewater, fats, oils and grease could be diverted from landfill and converted to...

Floating wetlands are being piloted as a way to improve water quality and increase habitat and...