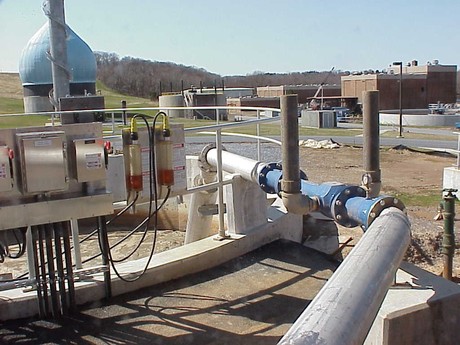 A wastewater treatment plant has tackled a persistent problem with fat, oil and grease (FOG) products via installation of a grease digester. The FOG products were fouling the primary clarifier, inhibiting the settling of solids, and choking the scum pit and scum-pit transfer line to the pressroom and anaerobic digester.

The plant, located in central Pennsylvania, accepts waste grease from a local commercial confectionery food processor, as well as restaurants and businesses in the area. Originally, FOG products were accepted and blended with septage, but this fouled the screens and degritting system.

To solve the problems of handling grease, a simple grease digester was implemented. The system includes a 150,000 L in-ground tank, a separate grease-receiving area, a control room, pump room and storage area, and a Venturi Aerator to supply the required dissolved oxygen to support the breakdown of grease. To further break down grease, the tank is seeded with live-cultured grease-eating bacteria from an incubator.

The treatment process is designed to handle 38,000 L of grease each day, which is added to the 150,000 L in-ground tank. The minimum retention time in the tank is 72 hours, during which the contents of the digester are aerated, pH is adjusted with a lime slurry and live bacteria are continuously dosed into the digester. Each day, 38,000 L of the treated grease are decanted from the digester to the adjacent headworks where they are blended into the plant’s influent wastewater.

Incoming grease is delivered by truck to an unloading station where the operator determines grease volume for billing purposes, ensuring the product is not mixed with sewage. A hose connects the tanker truck to the pipe stanchion quick-connect and begins offloading the grease, which flows directly into the digester where it is aerated and mixed. Lime is then added as a slurry and live bacteria are seeded from one of two biological activators (there are two units working on alternating 12-hour cycles). This pH-control process is important because, as grease degrades into free fatty acids, the pH drops precipitously and could kill off the beneficial grease-eating bacteria. The newly received grease is mixed in with the 115,000 L already in the tank. The operator decants residual liquids of degraded grease upon arrival in the morning and slowly blends the treated and digested grease into the headworks during the high-volume, first-flush cycle of the day. A Gorman-Rupp pump pulls from the digester and discharges through a 6″ Venturi Aerator, which pulls in atmospheric air, mixes it with the pumped fluid, then sends the aerated fluid back into the digester.

Following the installation of the grease digester there have been no plugs or fouling at the plant. The influent biochemical oxygen demand from the grease has reduced significantly, the clarifier performs better and requires less cleaning from grease fouling, and odours have been reduced in the pressroom. Now that there is a legal grease disposal solution, even the collection system is cleaner and there has been no grease fouling of lift stations. Additionally, the gross revenue is anticipated to be approximately $250,000 for the first year of operation on a capital project which was ~$200K. This is less than a one-year payback.

The NT328G is designed to meet the current and future needs of the oil and gas, water and...

The meters are designed to cost-effectively and accurately measure the flow of water, water-like...

Hannover Messe cancelled but AMX2020 to open in November