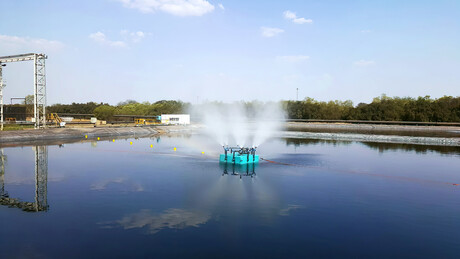 Even in our drought-ravaged country, torrential rainfall may not be welcome. That’s certainly the case for a large regional area in Western Australia. The local council built a wastewater pond that is so enormous, it’s reportedly visible from space.

The purpose of the pond is to collect water to prevent minor flooding when those enormous rainfalls hit. But it’s not a dam; therefore, the local council management team needed a way to dispose of all that water.

The equipment already in place did not quite achieve the evaporation rates, efficiency and reliability the council engineering team were after. Hence, they were looking for another solution. After some initial research, the council engineers contacted Tecpro Australia and asked for advice. They got it by the bucket load, so to speak.

Tecpro’s technical team suggested the E46 Floating Evaporator from EMiControls. This evaporator uses specially designed and patented nozzles to draw air into the water stream to produce water droplets which evaporate more readily. The design of the nozzles also minimises drift of potentially contaminated water droplets outside the perimeter of the wastewater pond.

When it comes to operation, each E46 system can be regulated from its own control panel or multiple evaporators can be run from one single control panel. The council decided to use individual controls for each evaporator to safeguard the system and ensure it was always operational.

The E46 Floating Evaporators have four HDPE UV-stabilised pontoons. The nozzles also use HDPE to cope with hazardous or corrosive liquids. Each unit also has a stainless steel lifting frame.

Everything needed to assemble the evaporator comes in a single crate, and it requires minimal tools and no technical expertise to assemble. In fact, it should only take an hour or two to assemble and have each evaporator operational.

In addition to being suitable for use in wastewater ponds, the E46 Floating Evaporator is also suitable for desalination plants, mining operations and decontamination applications.