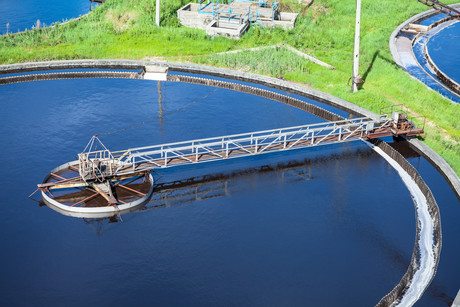 A trial study of sensor-based technology at Unitywater’s Kenilworth Sewage Treatment Plant has revealed an accurate, time- and cost-saving method to measure sludge.

The process of sludge formation and its rafting at the base of stabilisation ponds is not well understood and is often difficult to predict. Plant operators often find themselves in a ‘blind spot’ as its occurrence is invisible, well below the pond water surface. While the accumulation of sludge is a slow process, efforts to remove the accumulated sludge are time consuming. De-sludging is an expensive, messy process that can lead to lengthy disruptions of the process treatment. The rate of sludge accumulation and volumetric measurements are therefore essential from a maintenance and budget perspective.

Despite the existence of several methods to measure sludge, such as use of a ‘Sludge Judge’, effective monitoring is time consuming and can yield inconsistent results.

In October 2018, Kenilworth STP — a small-capacity Unitywater site in the Sunshine Coast hinterland — conducted a sludge survey to improve the efficiency and accuracy of sludge measurements, which were hoped to result in operational benefits and assist in the decision-making process on the timing of sludge removal.

The ponds were desludged and re-lined in October 2010, with approximately 6600 m3 of sludge removed at a cost of $540,000 (inflated to 2018). Significant discrepancies were apparent between the surveyed sludge volume and actual volume removed (38% increase).

Given the discrepancies in sludge volumetric measurements, as well as inefficiencies associated with the physical measurements, Unitywater was keen to trial the sensor-based technology.

Using Cerlic’s Multitracker and Blanko Sensor, a profile of mixed liquor suspended solids (MLSS) was logged versus pond depth. Two MLSS setpoints were adopted: one for the fluff layer (500 mg/L threshold concentration) and another for the top of the sludge blanket (5000 mg/L).

A maximum depth of 2 m was set to ensure that all the data was captured, with a maximum of 64 data points recorded as the sensor was lowered through the water column. The Multitracker emitted audio and vibration alerts when the two different concentration points were reached, logging depth and concentration values.

Measurements were taken at even intervals spanning the pond surface, resulting in 78 measurement locations covering about 70% of the pond’s 5400 m2 surface area. While the distance between survey points was not exact, this was acceptable because curtain anchors provided the only way to geo-reference the survey results using ‘ArcGIS’ (without GPS coordinates). Each ‘zone’ between curtain anchors was evenly divided, resulting in grid intervals that were approximately 6–7 m.

The sensor was steadily lowered through the water column at each location until it reached the pond floor. Readings were periodically checked against readings from a ‘Sludge Judge’ to verify the depth of sludge accumulation and to ensure the digital readings were reliable and accurate.

The average sludge accumulation across the survey grid was 340 mm, with the maximum depth of sludge at a single point being recorded at 520 mm. These depths represent sludge with an MLSS concentration above 5000 mg/L.

The average depth of sludge was much higher on the eastern side (428 mm) versus the western side (255 mm) of the pond, which followed the slope of the pond bottom. On average, the sludge depth was equivalent to 26% of the total water column depth, with a maximum of 32% at a single point. This means that the pond is currently at approximately 75% of its hydraulic capacity — a significant reduction in operating/working volume.

The total volume of sludge in the pond was estimated using two different methods:

The above methods resulted in two different sludge volumes: 1600 m3 from ArcGIS and 1360 m3 from the Trapezoidal Rule. The discrepancy is likely because the latter method does not take into account extrapolation of data points outside of the survey grid such as pond embankments and slope, which resulted in the estimated sludge volume being lower.

The rate of sludge accumulation, since late 2010, was estimated as ranging between 31–37 mm/year averaged across the pond surface area.

The trial study found that the pond was experiencing a 25% reduction in its operational capacity due to sludge accumulation over an eight-year period. The rate of accumulation was on par with expectations (25–50 mm/year) but the variance in the sludge distribution pattern was not anticipated and was largely attributed to the improper pond geometry. The trial also identified error in the as-built versus in-situ measurements.

The trial highlighted the potential of using sensor-based technology for studying sludge characteristics and settling patterns within maturation ponds. Due to the ease of obtaining MLSS results in a fraction of the time, and the simple testing method involved, it was easy to identify the fluff layer and sludge blanket layer effectively.

The combination of the Multitracker and Blanko provided measurable benefits over physical sampling methods such as ‘Sludge Judge,’ including highly accurate results with less opportunity for errors, ease of data storage, as well as reduced reliance, time and labour. This is especially true if operators are interested in the stratification of the MLSS concentrations, where the time and cost associated with determining the solids content in the pond becomes significant. Taking 78 samples with high resolution data in an eight-hour period would not be feasible with other methods. It appears the sensor-based technology brings in accuracy to the supervision process.

One foreseeable challenge, however, is determining the necessary resolution of data required to obtain the desired results. This is a particular challenge to STPs with a significantly greater pond surface area to cover — this work is a step in the right direction with results that satisfy time, quality and cost.

To read the study paper in full, click here.