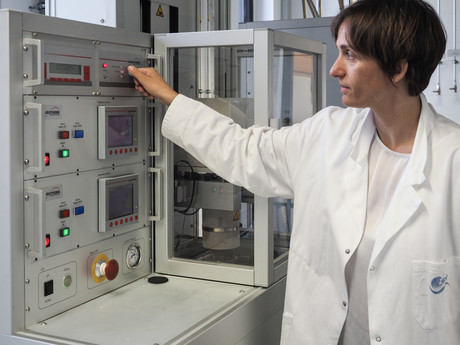 Phosphorous is a key component of fertilisers, detergents and food additives, but is a limited resource. Currently obtained from phosphate rock, investigations are underway to recover phosphorus from sewage sludge in a straightforward and cost-effective way.

All living organisms need phosphorus in the form of phosphate. Plants, animals and humans obtain it from soil — depleted farmland is usually replenished with fertilisers. Problematically, fertilisers are produced using mineral phosphorus resources that are finite, non-renewable and increasingly contaminated with cadmium and uranium. The largest deposits are found in just five countries, mostly in Africa. Mining pollutes the environment and consumes a great deal of energy. Dependent on offshore sources, the EU has to import this critical resource, which is so vital to the economy.

The Centre for Solar Energy and Hydrogen Research Baden-Württemberg (Zentrum für Sonnenenergie- und Wasserstoff-Forschung Baden-Württemberg, ZSW) is embarking on a three-year research project to develop a way to extract phosphorus during the incineration phase of sewage sludge treatment. To facilitate the research, a testing plant was established in early 2019.

The sludge produced by sewage treatment plants is an alternative source of phosphorus. Sludge is where the substance ends up in the form of phosphate, carried there with the wastewater of households and industry. Experts believe that up to 50% of Germany’s demand could be recovered by recovering it from sewage sludge.

Sludge incineration is a common treatment process that generates thermal energy via sewage treatment plants. Currently, sewage sludge containing phosphorus is incinerated. The ash is disposed of in landfills and mines, or mixed with cement during the production process, wasting a valuable resource that could be put to productive use.

Business prospects for phosphorus recycling look promising in Germany, where all large wastewater treatment plants will be required to recover the chemical element by 2029.

Recycling processes have been in development for 15 to 20 years. There are two competing methods: wet chemical processes that extract phosphorus from the sewage treatment plant and sewage sludge incineration. The advantage of the latter option is that it is well established.

Fluidised bed reactors have been burning sludge at large sewage treatment plants for decades, producing ash free of pollutants — processes are being developed to extract phosphorus from this ash. ZSW is aiming to start a step earlier by extracting the ash during the incineration process. If this concept proves to be viable, it will be possible to retrofit existing sewage incineration plants with the technology.

The new process in development

ZSW is testing and further improving the phosphorous recovery process on a test plant in the Stuttgart lab. A material containing calcium binds the phosphorus as calcium phosphate during incineration. The reactive limestone has proven to be sufficiently resistant to abrasion both in the lab and on a technical scale, making it an economical, non-toxic and locally available resource.

The mechanical shocks of particles colliding with one another, and with the wall of the reactor, produce finely abraded particles containing phosphate. A hot gas cleaning process separates them from the flue gas stream via a candle filter. Pollutants are gaseous at these temperatures, so scientists can obtain a stream of phosphate-enriched recyclable material that is practically pollutant-free. This phosphorus is then returned to the material cycle.

The results of the tests conducted so far on the ZSW lab’s fluidised bed system have been promising, with a successful trial to test the system in continuous operation. Researchers are now optimising the system by varying individual parameters of the fluidised bed process and the amount of additives. The ZSW researchers are aiming to produce an ash that is rich in phosphorus and ideally suited for subsequent use.