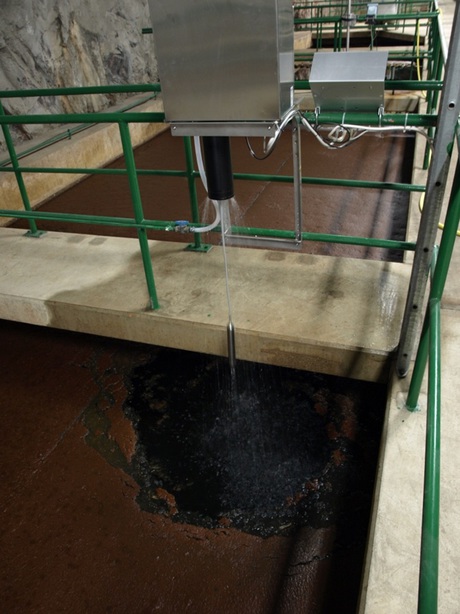 The removal of sludge is one of the most critical challenges in the creation of good-quality effluent from wastewater treatment plants. In this article, Ben Metman from Control Components explains why, and how measuring and monitoring sludge can provide optimum efficiency for the process.

Aside from lessening the environmental impact of human waste, modern wastewater treatment plants (WWTP) have embraced advances in science and technology that allow significant, positive inputs, such as energy for the plant (eg, biogas such as methane) and in some cases even revenue streams from processed biosolids (eg, nutrient-rich fertiliser for farming). In order for these advanced systems to work effectively, one of the most crucial parameters for plant operators to monitor is the total solids or sludge as it moves through the plant.

Why is sludge measurement so important?

Although the composition and concentration of sludge varies throughout the treatment pathway (primary, secondary and even tertiary stages), understanding the settling characteristics of sludge is critical if the plant is to optimise control. Primary sedimentation, biological stages, secondary treatment, effluent quality and subsequent sludge handling are all greatly affected by how well the settling has been achieved and, importantly, monitored.

By measuring sludge levels in both primary and secondary sedimentation tanks, operators may be able to ensure sludge extraction pumps are used efficiently and excess poorly settled sludge doesn’t wash out into effluent paths. By measuring sludge levels, operators can study sedimentation characteristics of suspended solids in the plant; understand sensitivities due to disturbances; and manage sludge levels to allow sufficient buffering for incoming hydraulic load variations.

During periods of high hydraulic loading (eg, after a storm), poor-quality or slowly settling 'fluff' sludge is at risk of removal. This will cause more rapid clogging of sand filters, which increases the need for backwashing, thereby increasing pump loads and electricity usage. If sand filters are not present, it could lead to expensive failure of effluent quality.

Further sludge-handling processes such as thickeners and dewatering equipment will all perform better when fed with higher-concentration total solids sludge. More diluted, lower-concentration sludge will require the increased dosing of expensive polymer dosing in thickeners, increase heating costs of digesters and require more chemical and mechanical processing in dewatered stages; not to mention increased pumping costs required to send increased reject water volume from these steps for reprocessing.

While no two WWTPs are identical, the push to improve efficiency through automation and improved process control is a common theme.

Aside from obvious labour savings, relying solely on manual sampling means that thorough analysis of plant characteristics and trends is limited to the frequency of sampling. In a WWTP with continuous, automatic measurement of critical process variables, there is a wealth of feedback which creates a robustness of system control, capable of rapidly identifying disturbances or operational problems.

In 2008, the CBX sludge blanket meter was specifically designed to accurately measure the level of floating fluff (unsettled sludge) and sludge level, along with the full sludge profile within a sedimentation tank. 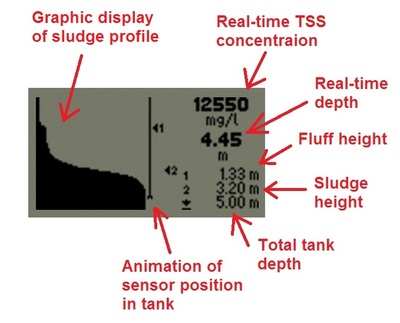 How the sludge blanket meter works

Following an input signal such as the passing of a rake, the  sensor is automatically lowered into the sedimentation tank as it continuously measures the suspended solids concentration as a function of the sensor depth (up to 10 m). Like a yoyo, the optical sensor is then retracted back into the CBX enclosure. As the cable and sensor are retracted they are automatically sprayed clean with pressurised water to prevent the need for manual cleaning by operators.

Unlike ultrasonic sludge blanket sensors that have their echo calibrated to a certain density which is indirectly related to the level of sludge, the CBX is programmed by operators with TSS concentrations that correlate to the desired fluff and sludge concentrations required to prevent suspended solids extraction in effluent and optimise sludge concentration for extraction. As the sensor is lowered, it directly reads suspended solids concentration, reporting back (4-20 mA or Profibus DP) the level at which each of the target concentrations has been found.This means that changes in fluff, sludge density and the presence of tank scrapers don’t impede readings or introduce the need for further filtering correction (such as averaging).

As real-time depth versus concentration is measured, both the sensor’s local display and a WWTP SCADA control system are able to plot a full sludge profile through the entire tank - see Figure 3. 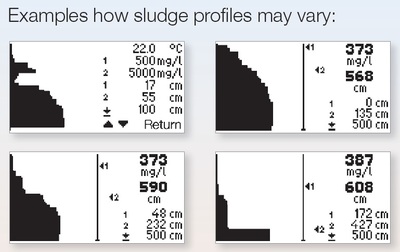 Figure 3: From top left, clockwise: a floating sludge layer, a high-fluff layer, a somewhat-settled sludge and a well-settled, most likely primary sludge level.

In order to evaluate the CBX and assess its performance in measuring suspended solids concentration and sludge level, Cerlic, in conjunction with the Swedish EPA, engaged Swedish Environmental Research Institute (IVL) to provide an independent evaluation and report.

Results of the lab and pilot-scale tests

In lab testing, the sensor was exposed to a range of different sludge scenarios including typical secondary sludge with 2 h settling time, mixture of return-activated sludge (RAS) and old sludge with 30 min and 1 h settling, RAS with no settling, pure biological stage sludge with 18 h settling and a mix of well-settled biological sludge with RAS left to settle for almost 4 h.

While the different sludge types presented different measuring challenges, such as a large floating sludge layer and stratified sludge layers with clear phase between each, the report concluded the CBX performed well against lab sampling in each case.

The report found that the automated sludge blanket measurement was accurate on each of the different kinds of sludge, homogenous or heterogeneous. For optimal plant process control,  the report recommended the use of the full sludge profile rather than just independent sludge and fluff levels, as it clearly indicated the presence of striated or floating sludge layers associated with plant overload or process failure which could therefore alert operators to early-warning signs of issue.

The pilot site at Sweden’s Hammarby Sjöstadsverk research plant was used to not only provide more realistic trial conditions for the CBX, but to assess its capability to measure plant/operational issues such as increased flow (stormwater), increased sludge removal (controller failure) and stopped sludge removal (pump failure).

The report indicated that the CBX once again was found to be a reliable and accurate sensor for measuring sludge blanket level. Researchers commented on the ease of sensor calibration against lab samples and testing against clean water for zero reference. It was recommended to make use of the blind zone variable to prevent the sensor from reading the concentration of top sludge and scum layers.

After the trial, it was noted how easily the sensor could be set up and operated, including the fact that the sensor never needed to be manually cleaned due to the effectiveness of the automated self cleaning. The inclusion of a rake input switch to trigger the sensor’s sampling run was noted to alleviate any concerns of potential damage in sedimentation tanks with scrapers.

Results of the full-scale test

The specific aims of the seven-week trial at Käppala WWTP were to test for the viability of replacing weekly manual sludge level sampling with a continuous online measurement and to specifically compare the performance of two different ultrasonic sludge level sensors to that of the CBX.

It was found that, following correct configuration, all sensors were capable of reading sludge level under normal conditions and showing sludge level decreases with excess sludge removal. The ultrasonic sensors had difficulty, however, with the varying nature of unsettled fluff and therefore needed to have compensation for changes.

In comparison to the two ultrasonic sludge level sensors it was found that the CBX:

Interestingly, while all sensors could see the removal of sludge, only the CBX realised that too much sludge had been removed from the tank, resulting in an empty tank. The ultrasonic sensors reported a remaining sludge level, most likely due to the disturbing effect of the scraper or a false reading from the bottom of the tank.

The researcher noted that in general the CBX was the more reliable and consistent sensor.

By using an effective sludge blanket sensor such as the CBX, plant operators can increase the robustness of their process control system, allowing greater ability to respond to and predict operational issues, while assisting in the optimisation of various sludge-handling stages.

The IVL Swedish Environmental Research Institute report on the performance and potential of Cerlic CBX was authored by Christian Baresel, Magnus Rahmberg and Zoe Fotiadou and dated September 2013.

Help in working through the workplace regulatory maze