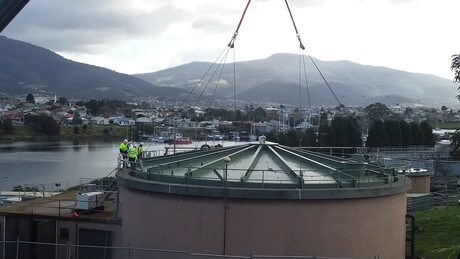 A new sludge heater supplied by HRS Heat Exchangers has formed part of an upgrade to one of Tasmania’s most important wastewater treatment plants, ensuring it is fit for purpose for the next 40 years.

TasWater is the water and sewage utility for the island state of Tasmania in Australia. Owned by Tasmania’s 29 local councils and the state government, TasWater is responsible for providing drinking water and collecting and treating sewage to the 540,000 people who live across the state. In 2020, TasWater and main contractor Aquatec Maxcon undertook a multimillion-dollar upgrade of the Prince of Wales Bay Sewage Treatment Plant in Hobart.

The Prince of Wales Bay Sewage Treatment Plant is one of the oldest sewage plants in Tasmania and the refurbishments, which included a new roof for the main anaerobic digester, will allow the facility to cope with the growing demand for wastewater treatment in the region. These improvements will ensure its operational suitability until 2060 as part of TasWater’s 10-year investment program.

In addition to the new roof, the upgrade included a new control system, new biogas waste flares and an improved heating system, all of which will help to reduce the greenhouse gas emissions associated with the operation of the facility.

As part of the upgrade package, HRS Heat Exchangers supplied Aquatec Maxcon with a corrugated tube heat exchanger to warm the recirculating sludge and maintain optimum operating temperatures in the main digester. As Tasmania is the southernmost and coldest state in Australia, maintaining digester temperature is crucial to efficient operation, particularly in the winter months when there is an increase in heat loss from the liquid sludge nearer the top of the tank.

Jim Foley, Project Engineer for Aquatec Maxcon, explained why the company chose HRS to supply the new digester heating unit: “There were a number of heat exchanger suppliers that we could have chosen, but one of the issues we faced was a limit of the space available for the heat exchanger, and the HRS unit had slightly smaller dimensions than some others for the same thermal performance. HRS provided me with a reference and a performance test, [and after that] we were happy to go with the HRS product.”

The supplied unit consists of a six-module HRS DTI Series heat exchanger to raise the sludge temperature from 33 to 36°C, with a capacity to process 72,000 litres of sludge every hour using hot water supplied by a separate boiler. To facilitate routine maintenance and cleaning, the heating unit has been installed outside the digester; a design which is rapidly becoming the norm for biogas plants due to the benefits it provides over internal designs. 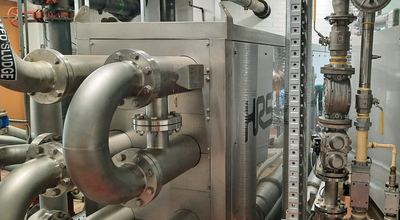 Despite the challenges of a global pandemic, the heat exchanger, which was manufactured at HRS’s factory in Spain, was delivered well ahead of the required installation date. Since operation, the unit has performed according to specification, dealing with a range of feedstocks and sludges, including sewerage sludge and fats and oils from trade wastes.

“As an engineer on a project such as this, you tend to focus on areas where you have problems,” Jim added. “I’m happy to say there were no problems with the heat exchanger.”

A new state-of-the-art wastewater treatment plant has now been completed as part of a $45 million...

Does the design of water and wastewater treatment plants in your business still rely on manual,...