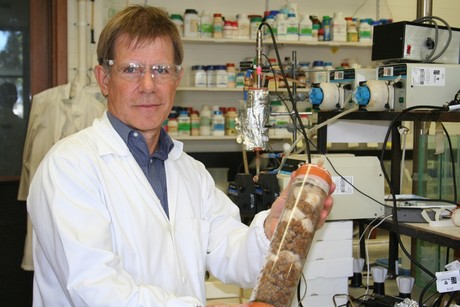 Murdoch University researchers have developed an energy-efficient process that they believe will revolutionise wastewater treatment by chopping the required electricity consumption in half.

With current wastewater treatment technology in Australia more than 100 years old, Murdoch’s Dr Ralf Cord-Ruwisch believed the time is right for a more energy-efficient approach. “At present, the majority of the electricity consumed by the nation’s wastewater treatment plants is used to oxygenate wastewater as part of the treatment process,” he explained.

Teaming up with Dr Liang Cheng and two PhD students, Dr Ralf Cord-Ruwisch designed a new system based around the naturally occurring bacteria that break down and process organic waste in water. He said gaining a deeper understanding of these bacteria was an important first step in developing the system.

“All the hard work of breaking down organic matter in wastewater is carried out by a range of live bacteria, which can be cultivated in a form we refer to as ‘biofilm’ during the treatment process,” Dr Cord-Ruwisch said.

“Like humans, these living bacteria require oxygen to function and survive, and in traditional treatment plants, a lot of electricity is used in pumping air bubbles through the wastewater to allow this bacteria to ‘breathe’.

“This is not a very energy-efficient process, as these air bubbles are only about 20% oxygen and the rest of it is nitrogen, which isn’t required.”

The research team believed there had to be a more efficient way of delivering oxygen to these water-dwelling bacteria than sending air bubbles to them through the wastewater. Dr Cord-Ruwisch noted, “As humans, we don’t fill our lungs up with water and then pump air bubbles into them to receive oxygen; we simply breathe the air directly into our lungs. Why should the way the bacteria take in oxygen be any different?”

The new treatment plant design operates on the concept of ‘passive aeration’, whereby the water is drained from the treatment reactors, leaving the bacteria behind on a supported biofilm and exposing them directly to the open air for a period of time. This exposure allows the bacteria to take in the required amount of oxygen to function, before they are resubmerged in the wastewater to absorb and store more pollutants.

“This is similar to the way in which a whale floats on the surface of the water, taking in enough oxygen from the air into its lungs to sustain itself before it submerges,” Dr Cord-Ruwisch said. The bacteria can then continue their work of removing organic carbon and nitrogen pollutants from the wastewater in a way that produces substantially fewer greenhouse gases and odours, and much less sludge.

Requiring less than half the electricity of a traditional wastewater treatment system to operate, and with a provisional patent on the process, the team has now formed a company that has aspirations to fabricate the processing plant on an industrial scale and is currently seeking partners to commercialise the technology. Dr Cord-Ruwisch noted that the technology is designed for municipal wastewater treatment, but could cover other wastewaters containing organic carbon and nitrogen compounds such as agricultural, food and fertiliser industries.

“Not only can we offer significant operational savings for water utility operators by reducing the volume of electricity required by at least 50%, but this new process could also dramatically lower the carbon footprint associated with treating our wastewater,” Dr Cord-Ruwisch said.

Image caption: Dr Ralf Cord-Ruwisch shows off the bacteria that break down organic matter in our wastewater.

Electricity could soon be used to clean up heavily contaminated industrial wastewater streams.

A plan to recycle wastewater and make it drinkable could see the delivery of water to city...

From waste plastic to wastewater treatment