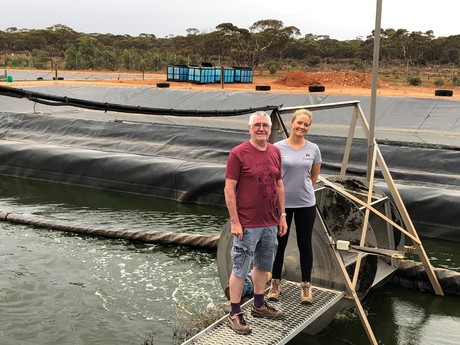 Flinders University researchers have confirmed that an improved wastewater system, using algae to accelerate the breakdown of effluent, presents Australian rural communities with a more environmentally and economically efficient solution.

Professor Howard Fallowfield, Professor in Environmental Health at Flinders University, has led research for the past 10 years into the use of high-rate algal pond systems (HRAP) for treating wastewater in South Australian rural communities. In 2016, the treatment system was accepted by the SA Department of Health Wastewater Management Group as an alternative to existing passive lagoon systems for use in South Australia.

“This system has the potential to dramatically increase the availability of water for re-use in rural communities,” Professor Fallowfield said. “These sustainable, low-energy systems are cost effective to run, and the capital cost of construction is also about 40% of the previous system for effluent-only schemes, and marginally higher for blackwater schemes.”

The study catalogues extensive testing of a HRAP system in a side-by-side trial with a conventional system at Loxton-Waikerie District Council’s Kingston-on-Murray site.

“The study demonstrated that high-rate algal ponds are a viable alternative to waste stabilisation ponds for the treatment of wastewater in rural South Australian communities and elsewhere,” said Prof Fallowfield.

“While a conventional system requires 66 days to treat the wastewater, HRAPs can perform a similar level of treatment in 5–10 days. Its ability to remove pathogens is equal to, or better than, existing wastewater systems.”

He added that by providing more reclaimed water to irrigate local woodlots, the new system is a winner, both environmentally and economically.

The composition of the incoming wastewater affected the treatment performance; the stronger septic tank effluent was better treated and produced more algal biomass for subsequent exploitation than facultative pond effluent.

Centralised treatment systems are commonly installed in non-sewered (mostly rural) areas, generally where disposal of effluent by on-site systems is made difficult by space constraints, poor soil absorption, failed soakages or other issues that create a potential public health issue, with Prof Fallowfield issuing the warning that “if you are close to the Murray, where there are sandy soils, there is also the potential to contaminate the river and groundwater”.

He points to the substantial reduction in size compared to conventional systems as being a clear reason why the new HRAP system is particularly beneficial to non-sewered rural communities.