One in three Victorians hang onto old phones 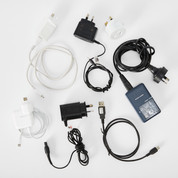 Since the state government’s e-waste to landfill ban, many Victorians have made a concerted effort to dispose of their e-waste correctly, with some businesses and local councils already seeing significant results since the ban came into effect on 1 July 2019. But — most are still storing old electronics at home, resulting in valuable resources sitting idle.

Research conducted by MobileMuster found that one in three Victorians hold onto their old mobile phones as a back-up, despite 73% never using them again.* MobileMuster Manager Spyro Kalos said it was important for Victorians to take stock of old e-waste lying around their homes and consider giving them a new lease on life.

“Electronic items contain so many valuable materials that can be recycled over and over again — 99% of a mobile phone’s materials can be recovered, re-used and repurposed — but they’re not much use when they’re sitting around at home unused,” he said.

E-waste is categorised as any item with a plug, battery or cord that is no longer working or wanted, and that can’t be repaired or re-homed. This covers everything from mobile phones, computers and TVs, to larger household items and whitegoods such as fridges, heaters and vacuums.

The e-waste to landfill ban was introduced to protect Victoria’s environment and recover resources such as nickel, copper and silver. The valuable materials recovered from all e-waste recycling can be turned into items such as pallets, cabling and computer screens.

Officeworks — which has provided its customers with free e-waste recycling for years — has seen a 9% increase in e-waste collected in its Victorian stores throughout July and August this year compared with the same period last year. The main items recovered include old IT equipment, ink cartridges and mobile phones.

Sustainability Victoria’s Interim CEO Carl Muller commended Victorians on their efforts to dispose of their e-waste correctly, and urged more to do the same.

“It’s clear from the increase in e-waste being collected at drop-off points around the state that many Victorians are collectively making a real effort to dispose of their old electronics properly — this is so encouraging and we urge more people to follow suit,” he said.

“Repairing, selling or donating electronics is a great way to give these items a second life — however, if they’re no longer working or wanted, there are a number of drop-off points across Victoria that will accept your e-waste to recover valuable materials.

“Every action, no matter how small, can contribute to a circular economy in which we utilise the maximum value of resources from existing products and materials and reduce the amount of waste we generate.”

The Victorian Government has committed $15 million to upgrade the e-waste collection network across the state, with 122 sites planned or already upgraded.

For a full list of drop-off points, visit www.ewaste.vic.gov.au.

*The survey was conducted by PureProfile on behalf of MobileMuster with a nationally representative sample of 1000 respondents in Australia aged 18–65+ years old.

A world-class recycling facility will be built in Albury–Wodonga to substantially increase...

Yume and SUEZ have entered a partnership that is aimed at limiting commercial food waste in...

Victorian waste-to-energy plant gets thumbs up

A waste-to-energy facility in Dandenong, Victoria, has been given the go-ahead after Great...

Sun safety sensor lets you know when you've had too much

Target these risk factors to prevent or delay dementia

The nbn is coming — is your lab ready?

Applications now open for next Superstars of STEM