NSW and Vic not fantastic on plastic, says WWF 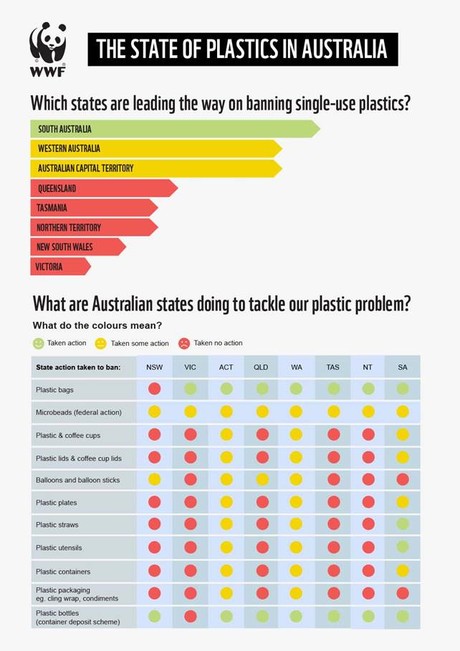 According to WWF-Australia’s plastics scorecard, NSW and Victoria are not tackling single-use plastics as well as other states, with both appearing at the bottom of the scorecard.

South Australia placed first; Victoria came last, with its only green tick awarded for the lightweight plastic bag ban due to take effect on 1 November 2019. It is the only state without a container deposit scheme and at this stage has no plans to consider one.

NSW was second last, nudging ahead of the garden state because of its container deposit scheme, which collected more than two billion bottles and cans in its first 19 months. NSW also restricts the release of gas-inflated balloons to up to 20 at one time. (Wildlife experts say no balloons should be released because they kill birds and animals that mistake them for food.)

WWF-Australia’s No Plastics in Nature Policy Manager, Katinka Day, said there was definitely room for improvement in the plastics policies of Australia’s two most populous states.

“NSW and Victoria consider themselves to be Australia’s leading states, but on plastic they’re definitely not fantastic,” Day said.

“Congratulations SA, you lead the way. South Australia tops the plastics scorecard with a container deposit scheme which has recycled plastic for more than 40 years, a ban on plastic bags since 2009 and a ban on plastic straws and utensils announced in July.”

South Australia is also considering a ban on takeaway plastic containers and cups as well as plastic lids including coffee cup lids.

The Australian Capital Territory and Western Australia tie for second with container deposit schemes and bans on plastic bags, and both states are considering bans on a range of other single-use plastics.

Next are Queensland, Tasmania and the Northern Territory. They too have container deposit schemes and bans on plastic bags but don’t score highly when it comes to phasing out other single-use plastics.

Day said WWF-Australia hopes the scorecard sparks discussion on the steps needed to reduce the plastic choking the environment and killing wildlife.

“We’re encouraging people to use the scorecard to tell their local politicians they want stronger policy on plastic,” she said.

“Let’s work together to phase out the 10 worst single-use plastics and fix this urgent waste crisis now.”

Day commented that Australia was lagging behind the rest of the world in its policies on single-use plastics, with Canada, Europe and Rwanda leading the way in a global comparison.

“In Australia we’re seeing some action at a state level, but there are currently no nationwide bans or proposed bans in place,” she said.

“A staggering 8 million tonnes of plastic end up in the world’s oceans each year and plastic dumped in one region can travel and impact others. This is a global disaster that requires collective action.”

A new recycling facility to be built by Remondis Australia in Dandenong, Victoria, will process a...