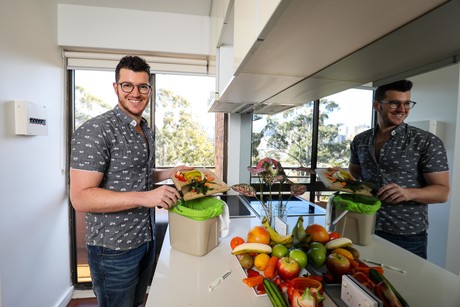 More than 4000 homes are participating in a City of Sydney trial to divert food scraps from landfill by turning them into green energy or plant fertiliser.

With funding from the NSW EPA’s ‘waste less recycle more initiative’, participating households (330 houses and 53 inner-city apartment blocks) have been provided with a small kitchen caddy to store food scraps, an initial supply of compostable caddy liners and a food scraps bin to be placed on the kerb for pick-up.

Lord Mayor Clover Moore said the trial was an important step in the evolution of waste collection and a critical component of the city’s waste strategy and action plan.

“There have been many advancements in waste separation technology, but the most effective method is when our residents separate the waste themselves at the source,” Lord Mayor Clover Moore said.

“Food scraps generally make up one-third of the average red-lid bin, so this trial will divert a significant amount of waste from landfill. There has been huge demand from residents to participate in this trial and, if successful, we’ll look at providing this service across the entire council area,” Moore said.

Food scraps will be sent to EarthPower Technologies, a food-waste-to-energy processing facility in the Sydney suburb of Camellia. The scraps will be processed using anaerobic digestion technology, which uses microorganisms to break down biodegradable material in a chamber without oxygen. This process produces biogas, which is converted to green electricity and a nutrient-rich sludge that is dried and granulated to produce nutrient-rich fertiliser.

EarthPower sells the green electricity it produces to the main energy grid. Electricity generated at the facility can power up to 3600 homes at full capacity and the fertiliser pellets are sold for use on farms and gardens.

With most City of Sydney residents living in apartments, compost facilities in the home are not always possible. Potts Point resident and strata committee member Joel Handler encouraged his apartment block neighbours to get involved in the trial.

“It’s a fantastic initiative, particularly for apartments like mine that can’t logistically manage a composting system,” he said.

“There are lots of items that can be recycled. It’s nice to know that the scraps are being processed in a facility in Sydney and can be used to benefit the environment. I’d love to see more residents get involved and for this trial to be a massive success for all those involved.

“Sydney residents can be proud of how much food waste they’ll be able to redirect away from general waste bins. For me, this has been a chance to learn, engage my neighbours and get educated in the process,” Handler said.

“There’s a real opportunity to inspire people to not only recycle their food scraps, but also think about what other changes they could make that might have a positive impact, whether it’s reducing their water use or recycling e-waste through the council.”

To find out more about the food scraps recycling trial, visit cityofsydney.nsw.gov.au/foodscraps.