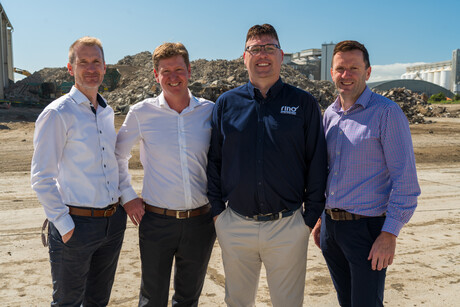 Rino Recycling has announced plans to develop an automated recycling facility in Brisbane that aims to reduce the use of virgin quarried materials by the construction industry. The plant is being developed in partnership with Irish companies CDE and Turmec, known for wet and dry processing of recyclables respectively.

When operational, the plant will be able to recycle over 1.5 million tonnes of material a year, effectively diverting it from landfill. This process is expected to prevent 8400 tonnes of carbon from entering the atmosphere — which is equivalent to about 400,000 trees being planted.

Daniel Blaser, General Manager at Rino Recycling, said: “When Rino Recycling acquired Byrne Resources, a hard-working family business operating in the field of waste recycling for over 15 years, we were excited to bring a renewed vision and passion for developing a world-class resource recovery business to Brisbane.

“Determined to be a force for positive change and to lead the charge for a circular economy in the local market, we identified the need to upscale the operation — and central to successfully scaling the business is investing in best-in-class technology to automate and scale the process and remove the requirement for manual handling of incoming material.

“The completion of this integrated hybrid plant will be the first of its type around the world and will pave the way for the future of recycling.”

The plant is set to be commissioned by 2023 and has been designed with minimal need for manual input. It will accept a variety of material, including waste from commercial skips and bins, demolition and hydro excavation, as well as concrete, and excavated fills.

This content will be processed through Turmec’s dry mixed recyclables plant to separate fines and remove contaminants, and is then sent on to CDE’s wash plant where recycled sand and aggregates of virgin material will be produced.

A network of conveyors is used to transfer waste between wet and dry systems.

CDE Business Development Manager Jason Hartmann said: “Handling and double-handling material is a costly process and limits the ability of Rino Recycling to process and repurpose the high tonnages it is targeting. This solution from CDE and Turmec will increase the total availability and throughput of the plant.

“Its ability to accept multiple waste streams, process the material and deliver an in-spec product at the end — all without manual intervention — is testament to the vision of Rino Recycling and the engineering excellence of both firms.

“More broadly, it demonstrates the knowledge and engineering capability of companies from the island of Ireland, whose solutions are transforming waste recycling operations the world over.”