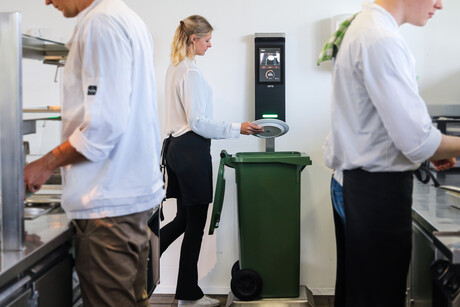 A Dutch sustainability innovation company has developed a waste-monitoring technology that will allow restaurants, caterers and other companies to drastically decrease food waste. Resulting from a collaboration between zero food waste company Orbisk and Studio Mango industrial design, the Automatic Waste Monitor aims to tackle the 1.3 billion tonnes of food that are wasted globally each year.

The food waste monitor can be used in any professional kitchen and includes a camera module, a weighing scale, a proximity sensor and an integrated user interface. A standard waste container is used.

Within the flow of the usual waste disposal, the camera automatically captures images of the food thrown into the container. Using artificial intelligence (AI), all ingredients are identified to inform what, when and how much food is wasted. The user indicates if the waste was pre-consumed (never used), post-consumed (served, but not eaten) or from preparations (eg, potato peels). After 6–8 weeks, the system has enough information to start providing insights. All data is presented to the system owner in an action-oriented dashboard, with an online report giving insight into food waste by week, day or ingredient, so that waste can be addressed and prevented.

Orbisk’s founders — with experience in software development, big data and analytics for supermarkets — found that huge volumes of food were never used by consumers. This was the inspiration they needed to create the first version of the Automatic Waste Monitor. The prototype system was installed in about 40 locations, including large hotel chains and the Dutch Ministry of Economic Affairs. After a few months of testing and making data-driven decisions, each of these locations, on average, was able to cut down their food waste by 50%. But the monitor needed further development and improvements to make it a scalable solution. Orbisk and Studio Mango began collaborating.

While Orbisk focused on the electronics and continued development of the AI, Studio Mango worked on the aesthetics, mechanical engineering, design for assembly, integration of electronics, prototyping and upgrading the user interface.

Location testing and user interviews were conducted to make the system as user-friendly as possible, resulting in a stable, scalable solution that can be implemented in professional kitchens worldwide.

Chemists from Rice University in Texas have converted pyrolysed ash from plastic recycling into...

The health benefits of 'shrooms in noodles