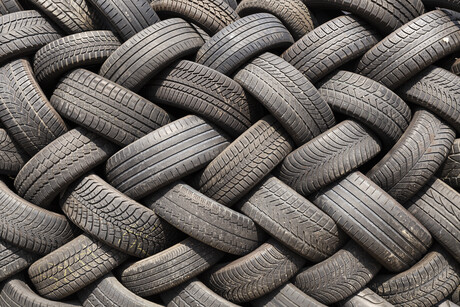 A study from University of South Australia researchers has analysed the structural integrity of walls made of tyres packed with earth, finding that they may represent a useful way of using a material that is otherwise an environmental concern.

When they are no longer safe for use on cars, trucks and other automobiles, end-of-life tyres represent something of a sustainability problem. They do not naturally break down, cannot be easily recycled into other materials and take up a lot of space. Australia alone generates 55 million of these tyres per year. As such, finding practical uses or methods of reusing them is a point of constant research.

Tyres have long been used as building materials. However, since their structural integrity had not been properly analysed, their use by architects and engineers has been limited.

The South Australian research team, which was supported by Tyre Stewardship Australia, evaluated the viability of tyres that had been filled with earth and then closed up with cardboard, creating what is known as a tyre-encased-soil element, or TESE. The researchers created a wall with these TESEs and applied various stress tests in order to understand exactly how they could function as building materials.

According to Dr Martin Freney, one of the study’s authors, the tests revealed that the wall was as structurally sound as conventional walls used in homes.

“The wall we tested was the first of its kind to be scientifically tested in this fashion, and all the data indicates tyre walls can be extremely strong and safe structures,” Freney said.

“While that structural integrity has been observed for many years in applications such as the retaining walls in earth-sheltered, Earthship homes, the lack of supporting data has prevented wider uptake of tyre walls by engineers and architects, and we’re hoping this study will change that and expand the range of projects in which these walls are used.”

The research even suggested that walls constructed using the TESEs would have some benefits over conventional ones, such as their drainage capacity or shock-absorbing ability.

“Not only are the tyre walls as structurally sound as concrete or wood sleeper retaining walls, they are also extremely resilient,” Freney said.

“Unlike a concrete wall, we found these walls have the ability to ‘bounce back into shape’ following impact, such as from an earthquake.

“And if a drainage material such as recycled concrete rubble or crushed bricks is used to fill the tyres, they also offer excellent drainage, which can be a major consideration in many retaining wall scenarios. Furthermore, the use of recycled fill materials reduces the environmental impact of the wall.”

While only one wall composed of TESEs was analysed during the study, modelling suggests other designs would be viable too. The researchers think that old tyres would thus make for a useful and sustainable building material.

“We really believe this research provides a strong evidence base for the expanded use of tyre walls in housing and other applications, and the next step will be to engage with an industry partner to develop a range of real-world applications for tyre walls.”

The research was published in Engineering Structures.