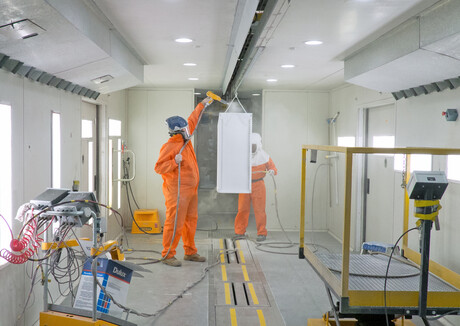 Concerns about the impact of nanoplastics and microplastics (NMPs) on global ecosystems has been on the radar for many years.1 Most attention to date has focused on microplastics in waterways and oceans, but much is unknown about their occurrence on land.2

NMPs contaminate practically all areas of the world including air, soil and water — streams, rivers, oceans and even arctic snow.3 They have been found in seafood, in tap and bottled water collected worldwide, in soils and even in samples of beer and honey.4

Microplastics originate from a multitude of sources such as wear and tear from larger plastic objects, from synthetic fibres in textiles, rubber tyres as they wear down, microbeads, a variety of industrial processes and wastes, and even from direct environmental emission. Their impact and threat to ecosystems has caused alarm and prompted investigations aimed at understanding the extent of the problem.

NMPs from powder coating may have slipped under the radar because they are usually dumped as industrial waste in dedicated areas at landfill sites, with an assumption that significant leakage won’t occur.

The idea that this unique class of NMPs can be stored indefinitely as an industrial waste product because it’s in dedicated landfill sites does not seem justified in light of recent work done on microplastic contamination of the environment.

We draw attention to this waste powder because it exists in large numbers of particles, which don’t readily degrade and probably won’t for centuries under ambient conditions. In addition, containment at landfill sites has likely not been planned for such periods of time — the NMPs are continually generated and dumped year-in year-out, and so accumulate, until, like many other microplastics, they disperse.

It seems reasonable to assume that the NMPs in the waste powder have not been accounted for regarding pollution by microplastics. Once these powder particles escape containment, they will be virtually undetectable.

Currently, little is known about global soils, and even less about microplastic contamination in Australian soils.7

The Monash study is investigating the origin and amount of microplastics in soil, and the effects on soil structure and consequences for biota. Seventeen samples of landfill soil taken from municipal waste facilities in Sydney recorded high values of microplastics, with the highest at 6.75% by weight (ie, 67.5 grams of microplastic in every kg).8

Powder waste has a 40–50% plastic content — the rest is made of fillers and minerals such as titanium dioxide and barium sulfate. Newer forms of powder coating have particle sizes ranging from 2–50 µm. The coating is sprayed onto products then heat-cured to give a paint-like finish. The waste product from this process — known as fines — results from unavoidable overspray that does not stick to the product being sprayed. Fines are essentially microplastics with particle sizes ranging from a few micrometres down to sub-micron or nanometre range.

The powder goes to landfill as a fine powder, or after heat-treating into a solid. Because heating increases the cost of disposal significantly, most operators send their waste to landfill as powder. Global industry estimates suggest that more than 800,000 tonnes of fines were generated in 2020.

There is good reason to believe the durability of powder waste is longer than that of other microplastics that go to landfill, which can be in the order of centuries. This durability comes from being engineered to withstand harsh environments. There is no reason to believe that NMPs from the powder-coating process will not leak from landfill in the same ways as other microplastics, as leachates to nearby soils and waterways further downstream.

To determine how many particles could be in 800,000 tonnes of waste, we made estimates for two NMP particle sizes: 1 µm and 0.1 µm.

Our research is exploring a method of recovering resources from powder-coating waste streams. Based on the collaborative work between Planex and Monash University, we conclude that the waste stream can be a concentrated source of titanium dioxide, rivalling the quality of that obtained from the ores ilmenite and rutile. Australian mining and production of titanium dioxide from these ores has inherent problems, such as the intense need for water, electricity and CO2 emissions. Along with two other industry partners, Planex and Monash are embarking on a detailed investigation of a low-emission process.

**Professor Sankar Bhattacharya works in the Department of Chemical Engineering at Monash University.

Sally Williams (Sustainable Sally) joins forces with the Martogg Group in a combined effort to...

As Managing Director, ResourceCo, Simon Brown is one of the pioneers of repurposing of waste in...

Brain protein could serve as biomarker for Alzheimer's