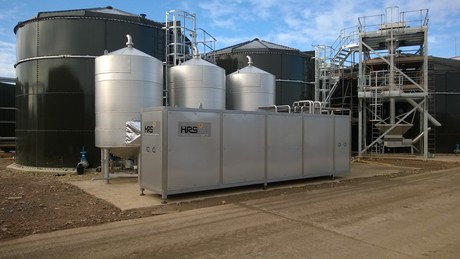 The recent report, The Outlook for Biogas and Biomethane1, from the International Energy Agency (IEA), provides a welcome assessment of the huge global potential of biogas from anaerobic digestion to contribute to a clean and low-carbon global energy system. However, it makes only passing reference to the importance of digestate in meeting these targets, something which depends on the conversion of a potential ‘waste’ product into a valuable biofertiliser resource.

As well as producing biogas, anaerobic digestion produces a residue known as digestate, which has the potential to be a valuable organic biofertiliser for use in agriculture. While the report’s estimate that full utilisation of the world’s potential production of biogas and biomethane — some 730 Mtoe* — could fulfil around 20% of global gas demand, such a ramping up of biogas production does not come without challenges.

In fact, this level of biogas and biomethane production represents a twenty-fold increase on 2018 production levels, resulting not only in a huge increase in biogas availability, but also in the production of digestate. However, while the 93-page report considers many factors, digestate is mentioned in just three short paragraphs.

The report is right in its assertion that, “using waste and residues as feedstocks avoids the land-use issues associated with energy crops”, and is also correct in saying that “digestate can be sold as a natural fertiliser, helping to offset part of the production cost [of biogas]”. However, it fails to recognise that digestate produced from waste and residue feedstocks often requires further treatment before it can be used as a fertiliser due to a range of crop health, hygiene and biological reasons.

In order to prevent the spread of weed seeds, crop diseases and other potential pathogens, either the feedstock or the digestate should be treated appropriately, with pasteurisation being a tried and tested technique across the world. In fact, in many areas, including much of Europe, certification schemes exist to back up such pasteurisation so that digestate that has been so treated can be used, sold, traded and applied as an agricultural and horticulture fertiliser, rather than a waste product. If the biogas potential expressed in the IEA report is to be reached, then the additional digestate produced (again a twenty-fold increase on 2018 volumes) must be treated in such a way as to maximise both its value and its agricultural acceptability.

One of the most energy- and therefore cost-efficient methods to pasteurise digestate is the HRS Digestate Pasteurisation System (DPS), which is based on heat exchangers rather than tanks with heating jackets. Using heat exchangers means that effective digestate pasteurisation is possible using surplus heat while allowing additional thermal regeneration levels of up to 60%. This saved heat can then be used for other processes, such as evaporation of the digestate to remove water. 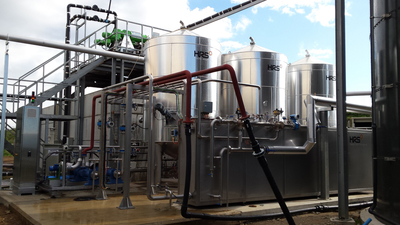 The HRS Digestate Pasteurisation System (DPS) can produce energy savings of 70% compared with other technologies.

The standard three-tank DPS provides continuous pasteurisation, with one tank being pasteurised while one is filling and another being emptied. The HRS pasteuriser uses a double tube heat exchanger to heat the digestate to 75°C above the required pasteurisation temperature. This allows for variation in the sludge consistency and its incoming temperature, making sure that the digestate is always properly pasteurised. The tanks can also be used individually; for example, to allow for routine maintenance.

The DPS is just one of several systems that HRS produces to improve the efficiency and sustainability of biogas plants and the anaerobic digestion process, with other examples including systems to concentrate digestate, dry biogas and recover waste heat from exhaust systems.

1. IEA (2020); Outlook for biogas and biomethane: Prospects for organic growth. Available at https://www.iea.org/reports/outlook-for-biogas-and-biomethane-prospects-for-organic-growth.

Main image caption: HRS says that if anaerobic digestion is to meet the scale advocated by the IEA, the resulting digestate will need to be pasteurised.

We need to build an inclusive, circular economy and work together to create a market for the...

Four academics comment on NSW Government research into recycling and the development of advanced...

With multiple environmental benefits, bioplastics could be vital in helping solve the world's...