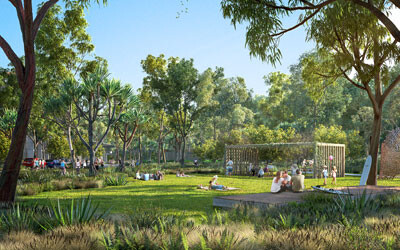 Master developer Sekisui House Australia is leading the way in sustainable living, with its four Queensland projects either targeting or achieving a minimum 5 Star Green Star certification from the Green Building Council of Australia (GBCA).

“We place sustainability at the core of our management approach, because we have not only the ability, but also the responsibility to make our homes and communities the happiest places in the world,” Seguchi said.

“Our continued investment in research and development allows us to create industry-leading living environments that also seek to protect and conserve our ecosystem.”

Solar panels positioned on the centre’s roof and carpark generate around 75% of electricity for the existing shopping environment, which feeds into a centralised, private community energy network.

Importantly, the GBCA certification recognises not only environmental initiatives, but also a community’s ability to enhance health, prosperity and quality of life, which has been key to the success of West Village.

Seguchi said that arts and culture has played a critical role in delivering social sustainability outcomes to the $1.1 billion mixed-use West Village development, having achieved a world-leading 6 Star Green Star Communities rating in 2017 — the highest accolade for masterplanned precincts in Australia.

“The relocation of Metro Arts from Brisbane from the Brisbane CBD to West Village will generate a number of cultural benefits for the community, delivering West End’s first new theatre in 25 years, two galleries and other bespoke facilities,” he said.

While Yaroomba Beach is still in its planning and approvals phase, Sekisui House Australia remains committed to targeting a 5 Star Green Star for The Westin Coolum Resort and Spa in the Design & As Built category, and a 6 Star Green Star for the masterplan in the Communities category.

With only one other hotel achieving a 5 Star rating in Australia to date, The Westin Coolum Resort and Spa will seek to implement energy and water metering, waste management systems, rainwater harvesting, targets for recycling of construction waste and improved air quality, and a range of other green initiatives to achieve the GBCA target.

These combined projects, which represent an investment of almost $4 billion upon project completion, not only deliver economic benefits for their communities and the Queensland economy, but also continue to elevate the standard of social and environment sustainability.

The facility will enable scientists to develop the next generation of advanced materials to...

Sydneysiders are taking advantage of a City of Sydney pilot program to recycle tricky items and...

Edge Environment is partnering with Frontier Economics to help advise businesses on their...

Cadbury to transition to recycled packaging

CirPro on the journey to Industry 4.0 with Siemens