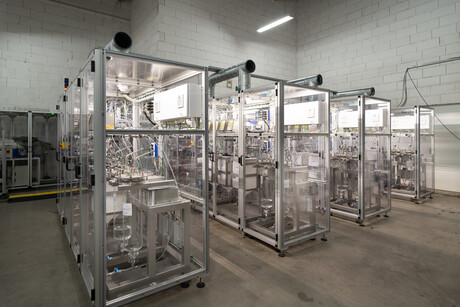 The Future Battery Industries Cooperative Research Centre (FBICRC) has opened its Cathode Precursor Production Pilot Plant in Western Australia, led by Curtin University. The plant will enable the development of technology and capability for the country to design and build cathode precursor manufacturing facilities.

Cathode precursors are necessary parts of batteries but require precision engineering and specialised materials. Australia has mineable resources that would make it a competitive location for the development of the precursors; specifically, it could utilise its nickel, cobalt, manganese, graphite and lithium to produce them.

Shannon O’Rourke, CEO of the FBICRC said, “The launch of the Cathode Precursor Production Pilot Plant is the culmination of several years of hard work, collaboration and integration by industry-leading partners and academic institutions, to progress the current and future needs of industry. We’re delighted to see this world-class facility up and running.

“The incoming government has committed to a National Battery Strategy which will help to seize local battery manufacturing opportunities. The Cathode Precursor Production Pilot Plant will be a key enabler to build an Australian manufacturing capability.”

The pilot plant will run test campaigns to assess precursor cathode active material (P-CAM) product units from BASF. These units will let the plant run different compositions and ratios of chemistries simultaneously, or run the same chemistries under four different conditions, changing variables such as temperature, pH or stirring rate. The resulting P-CAM will then be lithiated, calcined and electrochemically tested at the FBICRC-funded Electrochemical Testing Facility at the Queensland University of Technology. BHP Nickel West will also be providing equipment.

The FBICRC foresees Australia becoming a manufacturing powerhouse for the cathode precursors. Additionally, waste products of the manufacturing will be used to make fertiliser.

“Australia has the potential to develop into a competitive player in the international batteries industry. The Pilot Plant launch is a significant step in developing the on-shore capabilities and industry knowledge to create thousands of jobs and add billions of dollars to our economy,” O’Rourke said.

Matthias Dohrn, Senior Vice President, Global Battery Base Metals and Recycling, BASF said: “As a country rich in mineral resources, Australia is in a unique position to become a leading player in the global battery industry. BASF is delighted to be part of this development with our collaboration with the FBICRC and its members.”

Jessica Farrell, Asset President at Nickel West, said: “The launch of the Cathode Precursor Pilot Plant is a vital step towards developing a future growth industry here in Western Australia. The launch of this plant, made possible through the repurposing of equipment from our Nickel Sulphate Pilot Plant, will allow the FBICRC and the state government to explore further options for a downstream battery materials manufacturing industry. This is another exciting step for BHP as a major supplier of nickel, a commodity highly sought after by car and battery manufacturers across the globe.”

“The McGowan government is committed to growing and diversifying Western Australia’s mining industry.

“Western Australia isn’t just famous for having all the minerals you need to make a battery, we also have the capabilities to progress down the value chain and grow our battery manufacturing and downstream processing industries.”