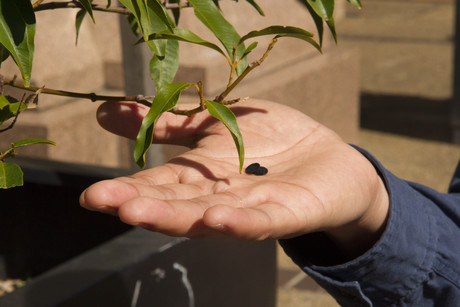 As nations work to reduce global carbon emissions, University of Sydney Professor Jun Huang believes there should also be an increased focus on carbon capture and re-use to minimise the impact of increased atmospheric CO2.

“The current global commitment to cut carbon emissions by 30% by 2030 is an enormous challenge, and one that will be difficult to achieve given that energy needs are accelerating,” Prof Huang said.

Carbon capture technologies have been around for over 10 years, but they require carbon to be held in deep underground chambers.

“Carbon conversion could be a financially viable alternative as it would allow for the generation of industrial quantities of materials, such as methanol, which is a useful material for production of fuels and other chemicals,” Prof Huang said.

Drawing inspiration from leaves, Prof Huang and his team are developing a carbon capture method that converts and recycles CO2 into raw materials that can be used to create fuels and chemicals. The team’s findings are published in the journal Chemical Communications.

“Drawing inspiration from leaves and plants, we have developed an artificial photosynthesis method,” Prof Huang said. “To simulate photosynthesis, we have built microplates of carbon layered with carbon quantum dots with tiny pores that absorb CO2 and water.

“Once carbon dioxide and water are absorbed, a chemical process occurs that combines both compounds and turns them into hydrocarbon, an organic compound that can be used for fuels, pharmaceuticals, agrichemicals, clothing and construction.

Although the research has been conducted on the nanoscale, the next phase will focus on large-scale catalyst synthesis and the design of a reactor for large-scale conversion. Prof Huang hopes the technology will be used by power stations to capture emissions from burning fossil fuels.

“Our CO2-absorbent plates may be small, but our goal is to now create large panels, similar to solar panels, that would be used by industry to absorb and convert large volumes of CO2,” he said.