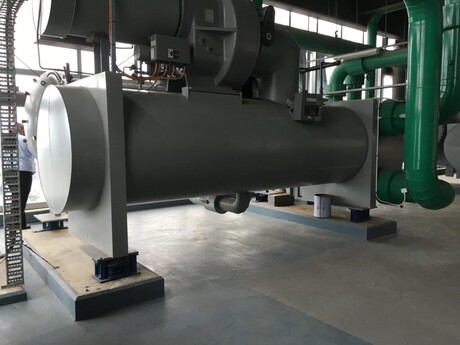 The project scope identified that a significant efficiency dividend could be gained by upgrading the legacy fixed drives to more efficient variable-speed drives, to power the two Carrier Centrifugal AquaEdge 19XR chiller systems that service the building. This posed unique challenges for project partner Carrier and its supplier, Eaton.

The plant room housing the chiller systems is located on the top floor, as is the case in many large commercial buildings in NSW, making accessibility a challenge.

“Modifying the existing chiller system was the best way to drive efficiency gains, and to do that we needed a product that would be small and easy to install,” Carrier NSW Modernisation Manager Sam Sayed said.

“The most effective option was to modify the existing chiller systems from a fixed-speed drive to a variable-frequency drive.”

The next challenge was finding a variable-speed drive that could be transported to the top floor by service elevator. Carrier decided that Eaton’s LCX9000 refrigerant-cooled drives would best meet the requirements of the project and deliver the desired energy efficiency outcomes.

“We modelled the cost and energy efficiency outcomes of retrofitting the two chiller systems with Eaton variable-speed drives and found it could achieve up to 47% in energy and cost savings — with an ROI of just under three years for each chiller,” Sayed said.

Eaton’s LCX9000 drives are compact in size, with low heat transfers that allow the enclosure size to be greatly reduced. The product offers 500,000 hours of mean time before failure and can remove up to 95% of heat generated.

Eaton customised its drive software to map the Carrier configuration points, allowing the Carrier PIC-5 controller to communicate easily with the drive via the UPC Modbus Gateway.

The project has allowed the property group to futureproof its building and maintain its 5 Star NABERS Energy Efficiency Rating.

“As a rule of thumb for commercial buildings, chillers usually come to 40% of the total electricity bill, so this upgrade was quite significant in the overall renovation works,” Sayed said.

Since upgrading the two chiller systems, in-rush current has dramatically reduced, which has given operators more confidence in handling peak demand.

Meet the brewer that never brews the same beer twice

Wine industry event to be hosted online in October

How to maximise grape yield during wine production

Deakin University works with MSC Software to build AM skills