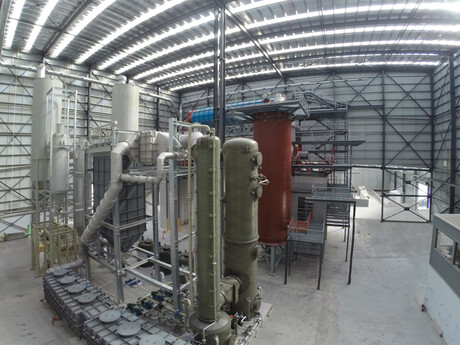 An industrial zone in the outer south-east Melbourne suburb of Dandenong is home to a permanently located integrated waste treatment and resource recovery facility. The 11,000-square-metre facility, which opened and started accepting soil in 2015, has a focus on sustainability — rather than simply sending contaminated soil to landfill, Renex Group has created an opportunity to recover and re-use the resource.

Convinced that there had to be a more long-term, sustainable solution to clearing contaminated land, the team at Renex unearthed novel technology proven over more than a decade in Germany. The technology employs a process that includes indirect drying of soil, pyrolysis, oxidisation and a sophisticated dry and wet gas cleaning plant. The resulting remediated soil is inert and non-leaching, thus no longer posing a risk to the environment and able to be safely re-used.

Melbourne’s Westgate Tunnel project is a high-profile instance, but simply one of countless examples of contamination by per- and poly-fluoroalkyl substances (PFAS), a problem impacting communities worldwide. Recent reports suggest that 3 million tonnes of rock and soil from the project are set to be dumped in a landfill facility at Bulla, west of Melbourne. However, in recent years there has been a significant shift by most states in terms of preferring recycling and re-use of materials as well as land remediation rather than dumping into landfill.

Engineering for the Dandenong facility was handled by Melbourne’s Lycopodium Process Industries, who adapted the technology to Australian Standards and regulatory requirements. The project faced challenges such as ensuring the process was energy efficient and had minimal and compliant emissions to meet strict EPA requirements.

The completed facility has the capacity to receive up to 100,000 tonnes of soil and other prescribed industrial waste each year. Soil contaminated with hydrocarbons, pesticides or herbicides, for example, gets excavated and classified onsite, then transported to Dandenong in EPA-licensed vehicles.

The Renex team then re-test the soil to verify the contaminants before mechanically pre-treating and blending the soils to achieve a suitable feedstream to the plant.

A drying step follows, in which all the water and moisture in the soil is removed. The soil is then indirectly heated using hot oxidisation gases, and the organics are removed. Those organics are then taken through to an oxidisation chamber and used as fuel for the system’s heating process. The soil is effectively pyrolysed (in the absence of oxygen) during this step, which removes any trace contamination remaining and renders the soil inert and contaminant-free. The heat for the process is provided by utilising the energy in the flue gases from the oxidisation of the contaminants and organics in the soil, resulting in less use of non-renewable fuels such as natural gas or diesel compared to portable in situ treatment plants.

The final stage is to clean the gas that emanates from the oxidisation stage, a multistage complex process that filters particles and scrubs out any oxidisation contaminants in the exhaust gases to ensure strict compliance with regulatory licensing requirements for discharge.

The completed facility is helping give landowners sustainable options to re-use soil and avoid landfill.