Should we have an IPCC for food? 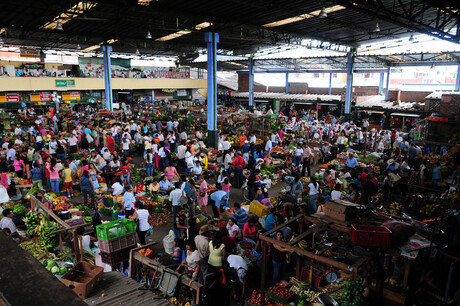 An intergovernmental body that sets Paris Agreement-style targets for global food system transformation may help both people and planet, researchers have suggested.

The first ever United Nations Food Systems Summit (UNSS), taking place on 23 September, aims to deliver progress on all 17 of the UN’s Sustainable Development Goals through a food systems approach, leveraging the interconnectedness of food systems to global challenges such as hunger, climate change, poverty and inequality. It has been said that the summit could be as historic to food system transformation as the Rio Earth Summit of 1992 was to climate change.

Rio sparked the creation of the Intergovernmental Panel on Climate Change (IPCC), which has brought scientists and governments around the world together and has greatly increased consensus and understanding of the severity of our global climate crisis. The first instalment of its Sixth Assessment Report, released this year, was its greatest call to action yet, confirming that climate change is widespread, rapid and intensifying.

While energy takes centre stage in climate discussions, a growing number of scientists have shown that food systems are a major contributor to biodiversity loss and climate change. Today’s food systems are also unequal and unhealthy for humans: diet-related disease remains the primary cause of premature mortality globally. The COVID-19 pandemic, conflict and climate change are exacerbated by increasing hunger — some 900 million people today are food insecure. Four billion people struggle to access sufficient and healthy diets, contributing to a public global health crisis that endangers global health even more than the pandemic.

As the human population continues to skyrocket and the climate crisis threatens food production, it is clear that global action is needed. Would an IPCC for food be part of the answer? The potential benefits and drawbacks are discussed in Science’s Policy Forum.

“Science needs to be better integrated with policy and action,” said Fabrice DeClerck, a researcher at the Alliance of Bioversity International and CIAT, who contributed to the paper.

While many global organisations prioritise food system transformation, none have the authority to bring together 196 nations like the IPCC did to reduce greenhouse gas emissions in the legally binding Paris Agreement of 2016. But action on food is as urgent as action on climate, and while the IPCC’s accomplishments have taken decades of drawn-out negotiations, we don’t have this luxury for food if we are going to achieve 2030 goals. DeClerck and co-authors suggest that a diverse set of leading food-focused groups could be integrated under a United Nations-style framework to be nimble enough to reach a faster consensus on the major challenges facing food.

The run-up to the UNFSS has already faced obstacles. As the authors note, some feel that the UNFSS is too focused on technology or member state-driven solutions and excludes many stakeholders, including the globe’s roughly 500 million smallholder farmers and low-income consumers who are at the highest risk of malnutrition and hunger. For this reason, the authors suggest, we need a knowledge–policy interface that is more inclusive of the food system’s myriad players.

“We have a tendency to say that scientific knowledge is the only valid knowledge out there, but there is also much indigenous knowledge and local knowledge that can be drawn upon to create robust food system assessments that are more inclusive,” DeClerck said. It is also critical for economic, social and behavioural sciences to be part of global food assessments, which are often led by biophysical, nutritional and climate scientists.

The authors propose three key considerations for an IPCC for food. The first is to understand what already exists in terms of expert knowledge, including the High-Level Panel of Experts on Food Security and Nutrition (HLPE), which is an existing and important science-policy interface of the UN Committee on World Food Security (CFS). The second is to understand that “if pluralism, equitable participation, and inclusion of diverse forms of knowledge cannot be ensured, a new platform could do more harm than good”. Finally, effective food system governance cannot be based strictly on scientific input, but interaction between science and action.

“Fostering a just and sustainable global food system requires commitment, political will, and the participation of governments and stakeholders,” the authors said. “The implicit suggestion in many science-policy interface initiatives that the synthesis, assessment, and communication of knowledge will strengthen governance in and of itself is misguided and overly simplistic, and it risks detracting attention away from actual policy action.”

DNA used to determine the age of lobsters

The labelling game: challenges and trends