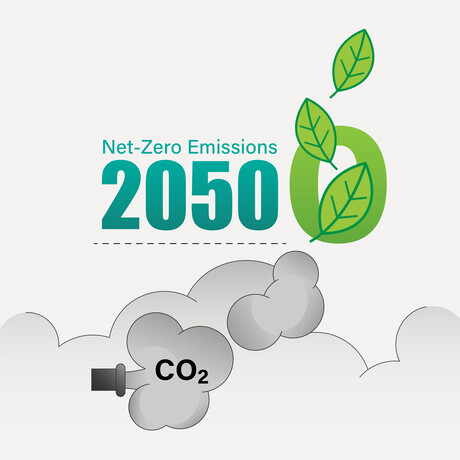 When it comes to sustainability terms and climate change, there are numerous ‘buzzwords’ and phrases used to describe organisations or buildings that are energy efficient and use renewable energy sources to reduce or eliminate emissions. The most popular sustainability term is of course ‘net zero emissions’, which has been widely popularised since the Paris Agreement in 2015 where many governments have formalised their commitment to achieve net zero emissions by 2050.

There are, however, many other terms used that are related to net zero but mean something else entirely different. This has led to much confusion to those not familiar with all the nuanced variations and concepts. In this article, we have compiled definitions and meanings of some of the most commonly used sustainability terms.

Net zero describes the point in time where humans stop adding to the burden of climate-heating gases in the atmosphere.

The concept of net zero emissions is akin to ‘climate neutrality’.

Low carbon is often used to describe an economy, organisation or building whose power needs are derived not primarily from carbon-intensive sources such as fossil fuels but from ‘cleaner’ or less carbon-intensive energy sources, such as wind, solar and hydroelectric power. Other forms of clean energy include, for example, wave power and geothermal, which are technically feasible but less common than wind or solar. Biofuels can play a role, but they may be viewed as fuel substitutes rather than a clean technology.

Zero carbon — also known as carbon zero — means that zero carbon emissions are being produced from a product/service, for example, zero-carbon electricity could be provided by a 100% renewable energy supplier. This term describes an activity where no carbon was produced in the first place.

An energy-efficient campus /portfolio/community where, on a source energy basis, the actual annual delivered energy is less than or equal to the on-site renewable exported energy.

Carbon neutral is a term used to describe the state of an entity (such as a company, service, product or event), where the carbon emissions caused by them have been balanced out by funding an equivalent amount of carbon savings elsewhere in the world. This is often achieved through funding climate-beneficial projects to make up for the greenhouse gases they emit. Such outside projects used as mitigation for greenhouse gas emissions are commonly called “offsets”, since they’re used to offset the emissions of the person or company who buys them.

The reduction of an entity’s carbon footprint to less than neutral, so that the entity has a net effect of removing carbon dioxide from the atmosphere rather than adding it. Becoming carbon negative requires a company, sector or country to remove more CO2 from the atmosphere than it emits — see also Carbon positive.

A carbon positive building takes this a step further, producing more energy than it needs and feeding that energy back into the grid.
Carbon positive moves beyond carbon zero by making additional ‘positive’ or ‘net export’ contributions by producing more energy on site than the building requires and feeding it back to the grid. Carbon positive projects can make significant contributions by helping to address the carbon intensity and damaging impacts of past building practices and lifestyles, and by offsetting situations where carbon zero buildings are not possible.

Carbon positive is mainly a marketing term, and understandably confusing because it is sometimes how organisations describe ‘carbon negative’ and ‘climate positive’. Carbon negative sounds bad even though it’s the most altruistic of all sustainability concepts and terms.

Which sustainability term/concept and target should you focus on?

Each of the above terms describe a stage along the sustainability journey. The answer to the question — ‘out of all the sustainability concepts described above, which one should I focus my efforts on?’ — varies depending on where you are now and what your priorities are in the short, medium and long term.

Governments have placed a significant emphasis on achieving net zero emissions by 2050 — which is about achieving a balance of naturally occurring greenhouse gases vs GHG caused by human and industrial activity. But we can’t stop there — there needs to be movement beyond net zero, which ultimately means achieving carbon positive or climate positive outcomes across the board.

Heritage retention works are an excellent example of how we can create a circular economy with...

A microgrid feasibility project in Victoria is combining smart technologies with intensive local...