A CO2 mineral carbonation plant is set to be built in NSW, in a joint venture between GreenMag Group and the University of Newcastle, thanks to $3 million seed funding announced by the NSW Minister for Mineral Resources for a pilot project.

Once mineral carbonation technology is proven at scale, an industrial plant could transform up to 20 million tonnes of carbon dioxide each year into safe and re-usable materials. This equates to taking a third of Australia’s cars off our roads each year.

The plant will demonstrate locally developed technology processes which transform CO2 from coal and gas-fired plants and industrial sources. The technology is expected to become economically viable once a carbon price has been established. There are around 30,000 fossil fuel plants in the world.

“The science of mineral carbonation is well established at lab scale and already used widely in processes such as carbonating water. The question is whether we can scale it up to make it economically viable and environmentally acceptable. We believe we have an answer and so does the NSW Clean Coal Fund,” GreenMag Group CEO Marcus St John Dawe said.

Mineral carbonation is an alternative to geosequestration, which has, for the past decade, been the energy industry’s primary solution to dealing with carbon dioxide. Geosequestration traps CO2 pumped deep underground.

Recent test drilling programs has revealed that the geology of NSW is not as well suited to geosequestration as the other states.

The GreenMag-Newcastle Process will combine CO2 with serpentinite, an abundant and easily obtained rock. The two-phase process transforms the serpentinite with the CO2 to make magnesium carbonate, which could be used for products such as building materials, bricks, pavers, cement and agricultural additives. There is enough serpentinite in NSW to capture carbon dioxide in this way for thousands of years if the technology proves to be feasible on scale.

Mineral carbonation mimics the earth’s own carbon cycle process by transforming carbon dioxide into minerals. “It is fast-tracking a natural process that would otherwise take millions of years through weathering,” Dawe said.

The pilot demonstration plant will be built at a decommissioned BHP experimental site in Newcastle and will provide bulk sample carbonate material to interested product developers by 2012. Given success at Newcastle, an industrial demonstration scale plant is scheduled to become operational by 2016 and an industrial full-scale plant could be available around 2020. 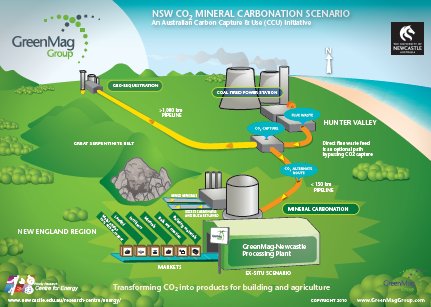 The joint venture plans to eventually license the technology overseas.

“The Indian and Chinese governments have already indicated they’re very interested in carbon capture and use (CCU). We want them to adopt this technology but we don’t want it to go offshore too quickly,” Dawe said. "NSW and Australia should get first mover benefit from these technologies.

"GreenMag-Newcastle will now seek funding from the Australian government and industry to match NSW's commitment. We hope they will follow NSW's lead in supporting this exciting new opportunity."

The benefits of a place-based approach to sustainability are compelling, said Chris Buntine,...

The role of cleantech in the economic growth, recovery post-COVID and in the face of climate...