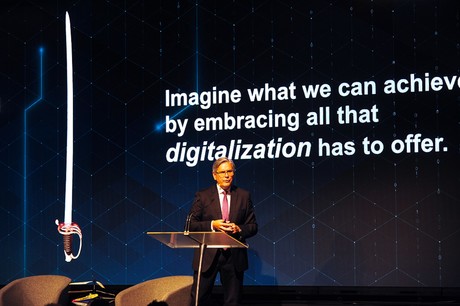 The Chairman and CEO of Siemens Australia and Pacific regions, Jeff Connolly, opened Digitalize 2019 with a call to action, warning that if Australian companies don’t get moving, they’ll be hit by the “double-edged sword” of digitalisation.

Success stories of businesses using technology to advance were at the forefront of Siemens’ Digitalize 2019 conference. The event showcased discussions on cybersecurity, smart infrastructure, scalability in manufacturing, Australia’s energy transition, future of work in the industry and opportunities presented by Industry 4.0. At the core of these discussions was digitalisation; particularly its role within organisations of all sizes — from large entities such as Powerlink Queensland and Deloitte; start-ups such as Brogan’s Way distillery; and SMEs such as Sage Automation and HeliMods.

The digitalised world is demanding change in the energy sector, perhaps more so than any other. The centralisation of the industry has brought new demands that have seen previous innovations rendered outdated much faster than anticipated.

Powerlink Queensland Executive General Manager Kevin Kehl discussed the challenges his company was facing and boiled it down to the ‘three Ds’: the decarbonisation of power generation; the decentralisation of customers and storage; and digitalisation itself, which, if capitalised on, could facilitate and enhance the other two.

Kehl cited the importance of predicting customer behaviour as critical to shaping the energy transition. He explained that Powerlink Queensland conducts a household energy survey every two years, with the local distribution companies in Queensland, to discover what customers are thinking in order to help predict  behaviours and expectations.

“I think, irrespective of any policy objectives, consumers will largely lead the change as they have,” Kehl said. “Indeed, that’s going to be the biggest driver of the change for us.”

Customers are investing more capital in rooftop solar and increased storage, making transmission infrastructure the glue that holds together the system. Australia is predicted to be the most distributed grid worldwide in the next decade and Kehl emphasised that this will require a much more dynamic and information-intensive approach.

Urbanisation is occurring across the world, with approximately 55% of the global population currently living in urban areas. Predictions suggest that by 2050, this will rise to 68%. Australia is no exception. Melbourne, for example, is predicted to have 7.3 million people by 2050, up from the current 4.6 million who live there now.

It’s clear that new approaches need to be adopted, such as the building of smart infrastructure, which is key to sustainability. According to Siemens Global Head of Urban Development Martin Powell, combining infrastructure with data analytics will provide countless opportunities to counter these problems.

“Using weather data analytics to gather readings on air quality could allow cities to create low-emission zones,” Powell said. “We could introduce ‘no school on bad air days’ or penalise people who drive in the affected areas.”

Other innovations are based on the idea of the digital twin, allowing for ideas and concepts to be worked through digitally to find any problems before any money is spent. This would also allow for different cities facing similar problems to share data and make adjustments according to their own unique challenges.

“We are applying machine learning so that we can reduce the amounts of maintenance that we need across our cities,” Powell added.

Industry 4.0 and automation is being increasingly adopted by small and medium manufacturers, debunking the myth that it’s only of value and affordable to big companies.

Hon. Cameron Dick, Queensland State Minister for State Development, Manufacturing, Infrastructure and Planning, commended the state’s manufacturers for being “well advanced on their Industry 4.0 journey”, calling it a showcase of the diversity in the sector.

Reeves’ business was growing at a rate of 100% per annum but faced the issue of losing consistency with expansion. Technology came to his rescue.

“One of the biggest things is maintaining the quality that people expect of your brand as you scale,” Reeves said.

Reeves’ passion for technology and futureproofing is what encouraged him to begin using Deacam’s Fermecraft technology combined with Siemens’ MindSphere software to monitor the brewing process and ensure each brew remained uniform.

The investment in upgrading automation and digital technology has prepared Kaiju for the next few years of manufacturing.

HeliMods CEO Will Shrapnel said, “You wouldn’t set up a workshop with physical assets and leave them lying about the place. It’s no different in the digital world. If you’re going to invest in digital technologies, you[’ve] got to understand how those assets are going to be used, re-used, stored and how you’re going to develop them over time. It’s critically important,” he said.

Unlike most industries in the current climate, there is less of a requirement to transition from an old model, but a need to grow the sector to meet the demands of the digital world.

AustCyber CEO Michelle Price said that, “Digitalisation is both an opportunity and a risk, but you must be on top of your game and vigilant.

“There are enormous opportunities available to us when we embrace cybersecurity and recognise that it is an investment in our future.”

Australia is claimed to be the number one per capita ransomware target in the world and is in the top 10 nations for email phishing attacks. Australia also has a $3 trillion superannuation system that, according to Price, “makes every single corner of every single populated space in Australia a high-value target”.

Price challenged businesses to take stock of their own security and ask themselves if they are “cyber prepared or cyber scared?”

It’s important to recognise that the future of work will require an adjustment to the way in which employees are continuously trained and upskilled, as well as changes in the higher education sector to ensure that students are being prepared sufficiently for the workforce.

Professor Bronwyn Fox, Director of the Manufacturing Futures Research Institute at Swinburne University of Technology, was involved in a panel on the subject and discussed the work Swinburne is doing in partnership with Siemens and Ai Group to facilitate this education process.

“We can create six cyber-physical labs that are an immersive environment for industry leaders and newcomers to come and understand the concepts of digitalisation.”

Collaboration from industry leaders, tertiary education institutions, unions and government agencies is crucial for the future of employment.

Ultimately, the consistent message across all speakers and discussions at the conference was that everybody needs to be able to adapt and cooperate so that the Australian market can thrive.