Sustainable apartments to be powered by shared solar 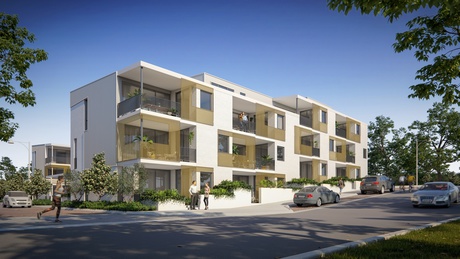 A Western Australian property group is aiming to deliver the most sustainable apartment development in the state while also becoming the first developer in Australia to utilise shared solar technology in a strata setting.

Yolk Property Group’s Evermore WGV project, based at LandCorp’s WGV estate in White Gum Valley, will deliver 24 sustainable apartments powered by solar photovoltaics and lithium battery technology. The co-director of Yolk Property Group, Pete Adams, said the development is being “shaped by our goal to make these apartments as sustainable and close to zero-carbon as possible”.

Evermore WGV will play a role in a pilot program, led by Curtin University at the WGV estate, examining how to increase the uptake of solar photovoltaics in strata residential developments. According to Curtin research fellow Jemma Green, who is leading the program, the group’s research has developed a governance framework and microgrid system for solar PV and batteries in strata residential developments — a first for Australia.

“Our research has revealed that solar PV and lithium battery storage technology can supply up to 80% of power needs, leading to a significant saving on power bills as electricity from the grid is reduced dramatically,” she said.

“Traditionally, developers have not used this technology due to the higher cost of batteries, but with these costs now reducing rapidly, and with the assistance of ARENA, we are able to demonstrate at Evermore WGV how this technology can work to the advantage of apartment owners.”

While the solar PV battery technology and associated strata governance system has been trialled on a small scale in the estate, Evermore WGV will facilitate the first practical, large-scale application. With strata fees injected into a sinking fund set to pay for any upkeep or upgrades to the technology, Evermore WGV’s residents are expected to benefit from a 30% saving on their electricity bills.

Other initiatives that will be incorporated into the development include:

“What we are aiming to produce is an apartment that encourages sustainability long after residents have been handed the key, hence the incorporation of transport and food initiatives,” said Adams.

“We’re taking a bit of a risk, because this hasn’t been done before and this is a development that won’t necessarily appeal to the masses, but we’re happy to play the ‘guinea pig’ if it encourages more sustainable development.”

Construction at Evermore WGV is expected to commence in early 2017 and conclude in early 2018. Apartment prices start from $349,000 and can now be purchased off the plan. For more information, visit www.evermorewgv.com.au.