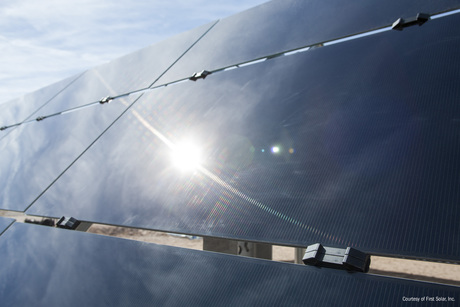 As part of an accelerating trend in sustainable development, the world now adds more renewable energy capacity than fossil fuel generation annually. With solar photovoltaics (PV) solutions leading the charge, the primary drivers of this transformation have been positive policy conditions in key markets and dramatic reductions in the installed cost per unit energy of PV technologies.

In Australia, successful solar PV project deployment, supported by co-investment from the Australian Renewable Energy Agency (ARENA) and state governments, has contributed to radical declines in the cost per MWh of large-scale solar. As a result, we are approaching cost levels seen in mature markets around the world — despite the first large-scale solar PV project being built in Australia just four years ago.

Although many factors influence the levelised cost of electricity (LCOE) for solar PV — including PV modules, balance-of-system (BOS), development, financing and operating costs — research and development (R&D) is the key fuel feeding a virtuous circle of innovations that continue to reduce the cost of large-scale solar and increase its impact on Australia’s Renewable Energy Target (RET).

R&D provides opportunities for technological advancement that help maintain momentum for large-scale solar around the world. In recent years, higher module efficiencies and declining manufacturing costs have been at the forefront of these advancements, surpassing expectations across the industry.

Higher module efficiencies — provided they are achieved without impacting cost and reliability — are a powerful tool for increasing the cost-competitiveness of large-scale solar because they also reduce balance of system (BOS) costs by allowing more nominal power of PV to be installed in the same area. The recent commercialisation of PERC (Passivated Emitter Rear Contact) technology is also driving efficiency improvements in crystalline silicon cells, which will ensure healthy competition and lower overall costs for large-scale solar.

Similarly, continued investment into research that improves module energy yield, which determines how a module performs in the varying climates in which it is installed, will allow more energy to be generated from the same amount of nominal power. Collectively, module efficiency and energy yield can be considered as energy density, essentially the energy generated per unit area, which is a crucial performance metric for comparing the cost-competitiveness of PV technologies. This is of particular importance to First Solar thin-film modules in Australia where higher temperatures across the country result in additional energy from the improved module temperature coefficient, and regions with higher humidity produce a relative energy gain due to changes in the solar spectrum.

Looking beyond module efficiency and BOS costs, another cost component to consider is debt and equity financing, which can be as much as one-third of the total system costs. In determining the cost of financing, lenders and investors will take into account the various factors which pose a risk to their returns — again, R&D plays a key role in reducing costs by helping to reduce and quantify risk.

Demonstrations of PV module reliability both through long-term field performance as well as accelerated stress tests, combined with improvements in the accuracy of energy prediction analysis, will help a project to attract more competitive financing by reducing the perception of technology risk. The third-party testing industry has developed extended reliability programs such as the TUV Rheinland Long-term Sequential Test, Atlas 25+ Test, VDE and TUV SUD Thresher Tests, and the Fraunhofer PV Durability Initiative — these certifications offer manufacturers an opportunity to demonstrate to customers and lenders that their products provide the highest level of reliability and thereby minimise the risk that the plant’s output will degrade at a faster-than-expected rate. In this manner, research and collaboration with the testing industry can help improve reliability and lower the cost of solar through cheaper financing and increased energy production over the lifetime of the plant.

Accurately predicting the generation of a solar plant over its operational life is another key input to the project revenue stream that affects the cost of finance. Improvements in weather forecasting, and increasing the accuracy and resolution of global historical weather datasets, is helping to reduce the uncertainty in solar availability for new and existing sites. Software and algorithms for predicting the lifetime energy production of different PV power plants are also continuing to develop both in terms of sophistication and the degree of field validation.

Several energy prediction software tools are now incorporating modelling of the shift in the solar spectrum that occurs due to changes in atmospheric conditions with factors such as humidity and air mass. First Solar has made contributions to the scientific body of knowledge through its R&D program via publishing its research and developing in-house software tools to assist the industry. As the solar industry is able to reduce the uncertainty of projected PV energy production, lenders can increase confidence levels that project revenues will be sufficient to pay down the loan and offer improved financing conditions.

Finally, a stable policy environment where there is confidence in existing frameworks supporting the deployment of renewables is crucial. Both actual policy change and the likelihood of change increase the risk lenders associate with a project because of the potential impact on the project’s financial model. Policy stability at both a federal and state level is therefore essential to help ensure Australia has a competitive cost of finance for large-scale solar.

R&D across the entire large-scale solar supply chain generates key learnings that can be shared with the wider renewable energy community, allowing other organisations to boost the efficiencies of their own projects; thus driving the industry towards the RET at a faster rate. An example of this is the University of Queensland’s PV research facility at Gatton, which is helping to understand the cost efficiencies of different thin-film PV solar technologies. The facility has been in operation for almost 18 months, and the results to date highlight the impressive performance of the thin-film PV single-axis tracking array. The industry is increasingly deploying single-axis tracking technology in large-scale solar projects, where the incremental cost of the tracking components is more than offset by the improved energy output, delivering a better revenue profile over the lifetime of the project.

Furthermore, the knowledge-sharing program under ARENA-funded projects will help improve the process for integration of solar energy into the Australian electricity grid, reducing development costs and paving the way for future large-scale solar systems to be connected. These learnings are being disseminated to those in the industry — researchers, utilities, investors and governments — and are accelerating the improvement of the integration of solar energy into the electricity grid from both an engineering and economic perspective.

As a relatively young technology, it is also critical that the development of solar projects is informed by long-term operational data. As Australia’s first operational large-scale solar plant, the 10 MW (AC) Greenough River Solar Farm is the best source of long-term solar energy performance data in the country and provides the entire industry with a better understanding of how modules can be expected to react in the harsh Australian climate.

Future of the Australian solar industry

While investment in R&D is critical to the future of the Australian solar industry, so too is the knowledge gained through the construction and operation of large-scale, grid-connected solar power stations. First Solar has delivered approximately 70% of large-scale solar projects in operation, including Australia’s largest solar plants at Nyngan and Broken Hill. These projects are a clear demonstration of the greater role large-scale solar can play in meeting Australia’s electricity needs by creating confidence in the solar industry and informing the direction of future R&D.

A promising example of recent progress is the New South Wales Government’s planning approval for four new large-scale solar plants in the state which will potentially double the state’s existing capacity to over 400 MW. ARENA has also recently announced The Clean Energy Innovation Fund, which will allocate up to $100 million each year to commercialise innovative renewable energy projects.

Large-scale solar is rapidly approaching cost-parity with conventional fossil-fuel generators, and in selected markets this has already been achieved. As a developing solar industry, Australia’s solar potential will only be realised if further investment in research and project deployment is made to increase the competitiveness of the technology. Ongoing targeted support and policy stability will continue to foster an attractive environment for investment, improving the integration of solar into the overall energy mix and enabling large-scale solar to reach its full contribution potential to the RET.

A research team led by RMIT University has developed an efficient, low-cost method for recycling...

Latest evolution in condition monitoring pulls out all stops

One-third of manufacturers planning move to the cloud: report

Can employers direct employees to be vaccinated?

What do women in health care choose to challenge this IWD?