An alternative water desalination and irrigation system, based on clean thermal energy, has received a $132,000 grant from the Australia-India Strategic Research Fund (AISRF). The project was one of 10 to share in $1.9 million announced yesterday by the Parliamentary Secretary to the Minister for Industry and Science, Karen Andrews.

The system uses a special water pump developed at RMIT University and Savitribai Phule Pune University. It works by boiling a refrigerant at constant temperature and using the pressurised refrigerant vapour to power a piston and pump water out. To suck water in, the vapour is cooled down, reducing the volume, pushing the piston in the opposite direction. 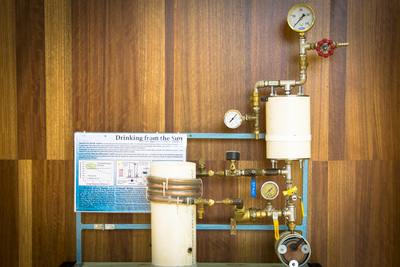 The system runs on clean power sources - such as solar thermal, geothermal or waste heat - rather than grid electricity, and generates both fresh water and water pumping power using thermal energy at temperatures below 100°C. Dr Abhijit Date from RMIT University said the system is suitable for poor coastal communities in India, “where access to fresh water is an issue but they cannot afford to use standard power-hungry desalination and irrigation systems”.

“The desal and irrigation system we are developing is both cheap to run and sustainable, producing no greenhouse emissions,” Dr Date said. He added that it could also “enable saline groundwater to be turned into fresh water and used for agricultural irrigation”, helping salt-affected farmers in Australia and across the world.

Researchers have built a lab-scale prototype of the thermal water pump system, with early tests showing the system can produce 1000 L of fresh water from 2000 L of saline feed water with a salt concentration from 5000-15,000 g/m3. Dr Date said the success of the system will “provide opportunity for industry development, employment creation and export”.

Other projects recently funded through the AISRF include the monitoring and management of effluent discharges into rivers (CSIRO and the Indian Institute of Toxicological Research) and the development of a liquid fuel produced from agricultural waste biomass (The University of Queensland and the Indian Institute of Chemical Technology). For more information about the fund, click here.

The agreement will allow farmers anywhere in Australia to remotely monitor water storage...