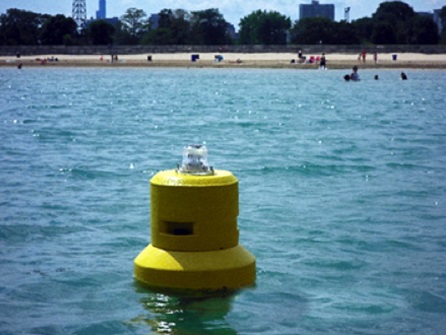 US researchers have developed a way to inform beachgoers in a timely manner as to whether or not the water is clean enough to swim in.

The technology, created by Michigan State University (MSU) and the US Geological Survey, is intended to be much faster than current beach management practices, which rely on a water sample being gathered and then taken to a lab for analysis. As noted by MSU Professor Phanikumar Mantha, “That can be anywhere from 24 to 48 hours” and is “not very helpful”.

The new technology comes in the form of buoys that are deployed in the water near a beach. Sensors embedded in the buoys gather quick and dependable information on water quality — everything from temperature to how clear the water is. Data from the sensors is used to automatically run executable programs specific to E. coli, which Professor Mantha described as an “indicator bacteria”.

Using a cellular modem onboard the buoy, the data is uploaded to a land-based server. From there, an RSS feed is used to get the information to the people who need to know — for example, a parks official, who then makes the decision whether or not to close the beach and webpages that provide the same information to the public.

“Our ultimate goal is to protect the public from getting exposed to contaminated water,” Professor Mantha said. “This problem can be particularly hard on children and seniors, who tend to be more susceptible to its dangers.”

Work on this early-warning system has been ongoing for more than a decade. Details have now been published in Environmental Science & Technology and the Journal of Environmental Management.

Photo courtesy of the MSU College of Engineering.