While soil moisture monitoring is often thought of as a water-saving technology, it also provides other significant benefits — for example, better crop irrigation and nutrition.

Crop nutrition is intrinsically linked to crop irrigation. Many nutrients move quickly with water or only move through plants when water is available. Nitrogen is released in water and too much irrigation can result in nitrogen leaching, causing low soil nitrogen and poor plant growth.

Testing only the nutrient content of a plant or soil in isolation may give you the answer as to why a plant is expressing a symptom, but not necessarily the contributing factors that led to the issue developing in the first place. Looking at concentrations of nutrient in isolation does not showing how the water availability is potentially affecting availability of the plant to access those nutrients. Monitoring soil moisture continuously, and comparing the water availability to the nutrient testing, adds significant value to any testing.

wildeye soil moisture monitoring is a simple soil moisture solution that continuously monitors the moisture in soil. Measurements taken every 15 min are reported daily to the web, so growers can make sure that the irrigation they applied kept up with the crops’ demands. Fine-tuning irrigation depth and timing, based on the measurements from wildeye, can ensure that water (and therefore nutrients) is always available for good growth. 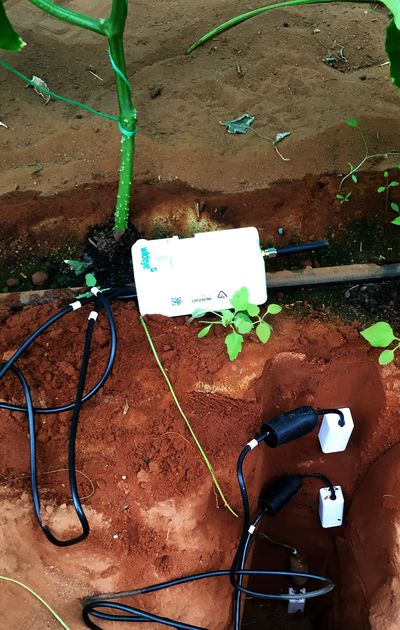 The product showed that a sandy loam soil (Figure 1) holds soil moisture as high as 21% before draining and only requires once-a-day irrigation. This information suggests that slightly less water would reduce drainage in the lower profile.

The lighter sandy soil (Figure 2) required more frequent, shallow irrigation, because of lack of water-holding capacity. Moisture greater than 12% drains through the profile taking nutrient away from the crop’s root zone.

The red line on each graph represents the deepest probe and is placed below the active root zone to measure drainage. On the left side of Figure 2, this line was quickly rising and falling indicating large volumes of drainage. Through observation and changing irrigation volumes and timing, the red line became less reactive, indicating lower drainage. Consequently, the plants recovered from looking yellow and became greener. This was a result of less drainage, allowing nutrients to be retained where the plants can access them.