Extending the life of culverts 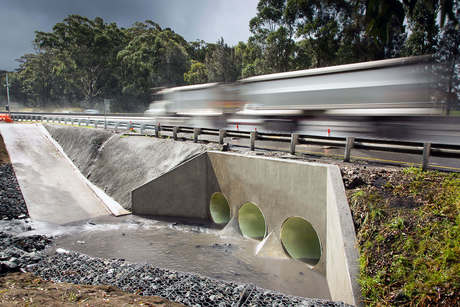 Combining traditional tunnelling technology with modern-day rehabilitation techniques enabled ITS PipeTech to submit and provide a solution to RMS (Roads and Maritime Services) to extend the life of an existing set of culverts that crossed the M1/Princes Highway outside the University of Wollongong.

The objective of the work was to provide structural integrity and equalise the bores of a triple-cell culvert that passed beneath one of the busiest arterial routes in Australia. A secondary consideration was to minimise disruption to the motorway that carries over 18,000 vehicle movements a day just two metres above the top of the culverts.

The culverts carry the Dallas Street branch of Fairy Creek, which crosses under the motorway via a three-cell precast concrete pipe. As the Princes Motorway was upgraded, the original 1350 mm triple culvert set was extended to take additional traffic lanes. The northern extension, however, was sized at 1200 mm, which, at times of heavy rain, was restricting the flow of water into the culverts. This caused flooding to the upstream creek valley and threatened local property and the university campus.

The project identified the probability of one or more of the culverts becoming blocked under a one-in-100-year storm event, resulting in flooding to the surrounding area and the possibility of an eventual collapse of the culvert that would risk the security of the motorway. Therefore, the feasibility review recommended that the pipes at the upper ends of the culvert set be enlarged to a common profile similar to the remainder of the culvert. Debris barriers with vehicle access would be installed to the culvert entrance for access to undertake maintenance and routine debris clearance under the project scope.

ITS PipeTech suggested tunnelling around the existing inlet pipes to standardise the three cells into a common profile to meet the hydraulic demands and reduce the potential for blockages and water retention in the upstream valley. The void profile of the existing culverts had to be created and structurally lined together with the existing pipe to complete the structural rehabilitation process. The proposal also took into consideration any potential damage to the riparian zone and the effects this would have on damage to local flora and fauna.

The proposal was to remove the initial 6.5 m of 1200 mm ID concrete pipework to each of the three cells and replace with a cast in situ reinforced structural pipe bore. Matching the existing diameter, it could be structurally relined with a UV-cured Berolina GRP liner to provide an uninterrupted free-flowing three-cell underpass to meet hydraulic requirements.

ITS proposed a modified tunnelling system using a three-stage heading arrangement commencing with the outer right, then the outer left before finishing with the middle bore. As the heading advanced, the existing concrete pipe could be broken up and removed from the workings, leaving a space large enough to facilitate casting a structurally reinforced surround to form a bore at a diameter similar to the existing downstream pipework.

ITS’s designs needed to accommodate SM1600 and 45-tonne axle loadings. The company opted for the use of its Tunneline cast in situ structural lining system to construct the three bores that were set at 1350 mm ID to match the internal main cell diameters. Each bore was cast in a single operation using 40 MPa structural concrete.

The final stage in the operation was to install a 1350 mm high-strength UV cured fibreglass Berolina lining through the culverts to provide a smooth bore structural lining with a design life of 75 years. ITS completed the work efficiently, effectively and to the client’s specification.