The power of mushrooms to create healthier waterways 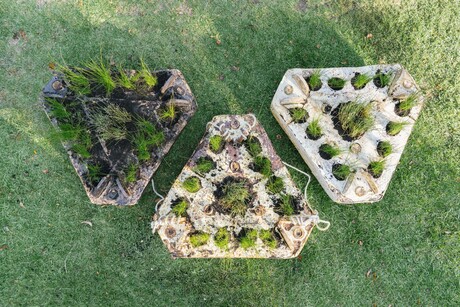 A trial of a fungi-based floating wetlands solution to create healthier, cleaner waterways is underway at the Royal Botanic Gardens in Melbourne.

Affectionately known as ‘mushi’ (pronounced moo-shi), the three floating wetlands of interlocking triangular-shaped modules have been designed by local engineers, researchers and architects.

Instead of using traditional plastic, this version is based on mycelium — the underground network of fungi — combined with organic matter.*

Above the water, the dense foam-like mushi is planted with native wetland species becoming a habitat for birds and insects, while underneath, the plant roots absorb excess nitrogen and phosphorous. The wetland prototype is the result of a research and design collaboration by studio edwards, Arup and Swinburne University of Technology.

The team has taken the mycelium wetlands from a theoretical concept, shortlisted in the Victorian Design Waste Challenge in 2019, to a living prototype after testing structural options and plant types. They will be monitoring and assessing it over the next three months.

“We were looking for ways to replace plastic in waterways: floating wetlands are a proven technology to help clean water but the traditional way of producing them, using plastic, creates other contamination issues when it inevitably degrades,” said Alex Reilly, Environmental Engineer, Arup Melbourne.

“The objective was to find an alternative to plastics using organic matter and waste to produce a product which would become a habitat for wildlife and allow the plants to absorb pollutants in the water.

“Mycelium can be strong, light, resilient, non-toxic and moulded into different shapes. Arup has been developing concepts using mycelium as a building, insulation and acoustic material for several years.” 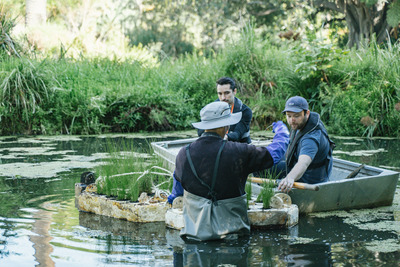 Swinburne researchers Canhui Chen, Daniel Prohasky and research assistant Joshua Salisbury-Carter contributed to the artificial wetland’s structural design and fabrication. They investigated the relationship between the geometric design and the buoyancy of the wetland, as well as the material durability of the mycelium composite for outdoor use.

“The final product was prototyped and manufactured at Swinburne ProtoLAB, with the support of Swinburne architecture graduates,” Canhui Chen said.

“This technology could be a good complement to our working wetlands system, which currently harvests stormwater from surrounding streets.”