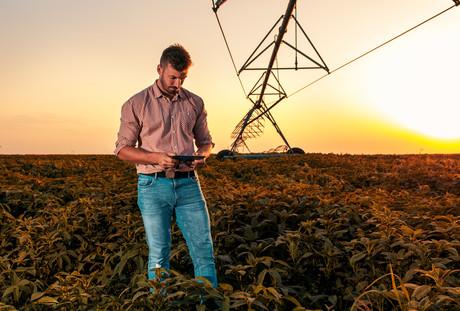 When it comes to managing the challenges of water scarcity, Australia has it tougher than most. Of the 2,789,400 GL of rain estimated to fall on Australia per year, just 292,000 GL finds its way into surface water or groundwater supplies,1 with the rest either being lost through evaporation or absorbed by plants. As the world’s driest inhabited continent, Australia has learned to make the most of its available supplies of water to sustain the needs of its population of 26 million.

The agricultural sector is a major consumer of the nation’s water supplies, meaning it must work especially hard to ensure that the available supply of water is utilised effectively. Around 50–70% of the nation’s water is used for agricultural activities, of which 90% is used for irrigation.1 Figures from the Australian Bureau of Statistics for agricultural water use for 2017–2018 show that a total of 22,470 businesses used irrigated water supplies, consuming 9,734,182 ML of water.2

Irrigation is the lifeblood of Australia’s agricultural economy. Dating back to 1886, the use of irrigation for agriculture in Australia has grown from a disused sheep ranch in Mildura to a network spanning several thousands of square kilometres. Today, water delivered by irrigation is key to growing a variety of crops including cotton, rice, grapes, cereals, fruit and nuts as well as hay and grain for dairy herds. It also makes a significant contribution to the wider economy, generating additional revenues directly through the processing and sale of crops, and indirectly through connected employment, including the engineering and technical support of the irrigation systems themselves.

While just 5% of Australia’s land is irrigated, this proportion accounts for around 30% of all agricultural production, making it important to ensure that supplies are managed and maintained as efficiently and as carefully as possible.

Making the most of every drop

The importance of conserving supplies is highlighted by the significant impact that a dry or wet season can have on agricultural activities. During the Millennium Drought in 2000–2011, water use for agriculture decreased by 37% in the period between 2000 and 2005,3 causing widespread disruption, including crop failures and unemployment in communities directly reliant on the cotton industry.

Projections from the Australian Bureau of Meteorology indicate that there has been a steady increase in the incidence of extreme heat events and the frequency of prolonged droughts since the 1970s, most likely caused by climate change.4 This has led to variations in expected weather patterns, making it difficult to predict the quantity and pattern of rainfall from one year to the other.

Added to this is the fact that every user is subject to a strict allocation controlled by the state. Users must ensure they do not exceed their allocated quantities, which are either based on their metered usage from previous periods or, where this does not apply, to theoretical requirements based on the type of crop being irrigated and the size and nature of the area in which it is being grown. Those users that exceed their allocation are charged a penalty according to the excess volume extracted and may also face additional compliance actions under the Natural Resources Management Act 2004.

There is a need to ensure that the demand for irrigated water does not exceed available supply. A good example is the Murray–Darling Basin, where close management of irrigated water supplies is becoming increasingly important in limiting environmental damage caused by a combination of growing demand and potentially unsustainable farming practices.

In each case, it is in the interest of the user to ensure that any wastage through over-consumption is minimised and that they can accurately measure and control the quantities of water they use for irrigation.

Like in any water distribution network, it is inevitable that some water will be lost in irrigation networks between the initial source and the final point of use. Traditionally, water loss in irrigation networks has tended to centre around four main causes: leakage, seepage and spills, evaporation and theft (the unauthorised and invariably unmeasured extraction of water by the user or third parties).

With no new sources of water to supplement irrigation supplies, the onus is on those providing the water and those using it to find innovative ways to make the most of what there is. With the development of technologies to measure and control the flow and extraction of irrigated water more effectively, many problems are being addressed. Coupled with the ability to collect and use near-real-time or real-time data for reporting more easily, the result has been a significant improvement in the way that irrigated water supplies are managed.

The adage ‘you cannot manage what you do not measure’ is especially pertinent to irrigation, both in terms of assessing consumption and finding ways to stem avoidable wastage. For this reason, flow meters are now a standard item of equipment used throughout irrigation networks. ABB’s high-accuracy AquaMaster and WaterMaster electromagnetic flow meters are amongst a range of approved flow technologies for irrigation applications that provide a yardstick for ensuring users adhere to their allocations and for quantifying losses through leakage, evaporation and seepage.

The WaterMaster from ABB.

In many cases, flow meters are forming part of increasingly sophisticated automation systems aimed at further reducing avoidable water losses through enhanced measurement and control. Using measurements from flow and level instruments, these systems handle the opening and closing of regulating gates in irrigation networks to ensure the right amount of water is supplied at the right times to meet user demands.

Options range from basic automated channel control, where users can remotely access data on flow rates and water levels and use it to manually adjust their gate controls, through to fully autonomous systems featuring networked channel gates that automatically regulate channel flow and level and ensure users receive consistent supplies. At the high end, these fully autonomous systems can be further augmented by the inclusion of additional business-level functions that manage, schedule and record deliveries of irrigated water and ensure that users adhere to their allocated limits.

Compared to manually operated systems, automated systems can help to substantially improve water management, delivering a variety of benefits including:

There is an increasing requirement for the irrigation industry to know that their flow meter assets are performing accurately and reliably. Accuracy directly impacts on irrigators billing and revenue. This has been a challenge for irrigators as the technology, up until now, has not existed to perform in situ checks on flow meter health. ABB has addressed this in AquaMaster 4 with the latest digital technology supported by the ABB Ability Verification Tool that allows the customer to perform a simple, non-intrusive test via near-field communications (NFC) and generate a certificate to satisfy local authorities.

Looking to a sustainable future

The events of the opening months of 2020 are already providing a salutary lesson that the Australian continent needs to be prepared to handle the potential issues surrounding climate change. With water a precious yet unpredictable resource that is vital to the country’s agricultural and economic prosperity, the need to make every drop count through efficient and effective irrigation management is of paramount importance. Instrumentation plays a key role in ensuring a sustainable future for water irrigation.

A research team from Nagoya University has developed a novel method for removing heavy metals...

Good water management could save our planet