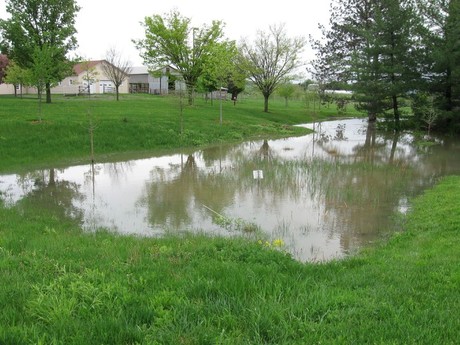 A team of US researchers has found that stormwater detention basins can do more than just control water flow. It looks as though they could play an important role in protecting the marine environment by removing nitrate.

Louisville, Kentucky, is home to countless stormwater detention basins, built near large construction projects with the intention of controlling the flow of rainwater and run-off. But these basins may prove to function in an additional, unintended, yet beneficial capacity.

According to Lauren E McPhillips, Assistant Professor of Civil and Environmental Engineering at the Pennsylvania State University (Penn State), the basins may help to control nitrogen run-off into rivers and lakes.

Speaking at the annual meeting of the Ecological Society of America on 12 August, McPhillips explained that, together with colleagues at Cornell University, she has been studying stormwater detention basins in urban and suburban areas in Ithaca, New York.

“Part of the goal for stormwater detention basins is to manage flow,” said McPhillips. “Increasingly, we are trying to get more water quality goals out of them.”

Controlling run-off from rain and trapping sediment has always been a goal of the basins, but new techniques may also make them suitable for removing nitrate from the water. Nitrate comes from sources such as atmospheric deposition on roads, car combustion and lawn fertilisers.

Nitrogen is a target because, although the atmosphere is composed of 78% gaseous nitrogen, other forms of the element such as nitrate cause overgrowth of algae in bodies of water. This eutrophication removes oxygen from the water and creates underwater deserts where fish and other organisms cannot live.

“These basins have always been treated as black boxes looking at water in, and percentage efficiency,” said McPhillips. “However, different designs of these basins perform differently, and now we are looking at performance and specific mechanisms for removal of nitrogen.”

In general, stormwater basins are either wet or dry. Water passes through dry basins in a few days, while wet basins have standing water for much longer. A variety of things can happen to the nitrate in the basin. It can pass into the groundwater and then to rivers, streams and lakes; it can be taken up by vegetation; or it can be converted to other compounds by microbes living in the basins.

While decay of basin vegetation places the nitrate back into the basin and the groundwater, some microbial assemblages can convert nitrate all the way to gaseous nitrogen, thus removing it.

When sampling the basins, the researchers checked microbial DNA for a gene allowing conversion of nitrate to nitrogen gas. This gene produces an enzyme that can convert nitrate into gaseous nitrogen.

“Typically, the basins are designed to be dry, but as sediment from run-off and vegetation that grows in the basins builds up, they can become wet basins,” McPhillips said.

The research team found that wet basins were more capable of producing gaseous nitrogen than dry basins. However, the researchers also discovered that partial conversion produced nitrous oxides and consumption of organic matter produces methane, both greenhouse gases. The wet basins showed higher levels of the gene that allows complete conversion of nitrate to gaseous nitrogen.

According to McPhillips, designing the basins to hold water from the beginning could decrease production of nitrous oxides, because the longer the basins hold the water, the more complete the conversion from nitrate to gaseous nitrogen.

As for the methane, McPhillips suggested that engineering the basins so that the water retention layer is below ground and not on the surface of the basin could prevent the methane from releasing into the atmosphere. Trapped in the soil, oxygen would degrade the methane.