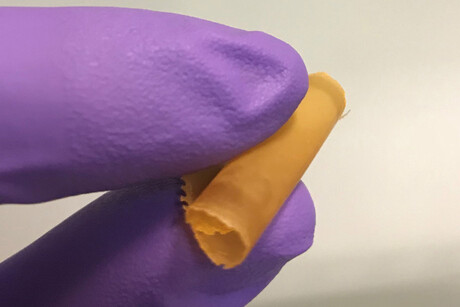 New, high-performance adsorptive membranes enable one-step desalination and purification of complex water sources with the added bonus of being able to target and recover potentially valuable ions, researchers report in the journal Science.

As the global water demand grows, efficient methods for cleaning complex, non-traditional water sources, such as wastewater or seawater, are becoming more important. However, current water purification technologies are one-dimensional and can only be used for desalination or the removal of toxic trace contaminants. Thus, water treatment plants require complex multistage systems that are costly and relatively inefficient. What’s more, some contaminants, like precious metals and nutrients, could be valuable if recovered during water processing, but due to current technologies’ inability to target and separate specific ions or molecules, these materials are often discharged into waste streams or reintroduced into the environment.

Adam Uliana and colleagues from University of California, Berkeley have now presented a general approach for the fabrication of robust, tunable adsorptive membranes that enable one-step desalination and purification of complex water solutions and also allow for the removal of specific target solutes. The membranes feature porous aromatic framework (PAF) nanoparticles embedded within ion exchange polymers.

According to Uliana et al., salts are removed using a series of cation and anion exchange membranes. At the same time, PAF particles can be tuned to capture specific ions, allowing for simultaneous desalination and decontamination of complex water sources. “The efficiency of this one-step process contrasts starkly with conventional intensive water treatment methodologies, which require multiple steps to achieve similar results,” the authors wrote.

Desalination — the removal of salt — is only one step in the process of producing drinkable water, or water for agriculture or industry, from ocean or waste water. Either before or after the removal of salt, the water often has to be treated to remove boron, which is toxic to plants, and heavy metals like arsenic and mercury, which are toxic to humans. Often, the process leaves behind a toxic brine that can be difficult to dispose of.

The new technique, which can easily be added to current membrane-based electrodialysis desalination processes, removes nearly 100% of these toxic metals, producing a pure brine along with pure water and isolating the valuable metals for later use or disposal.

The researchers hope to be able to tune the nanoparticles to remove other types of toxic chemicals, including a common groundwater contaminant: PFAS, or polyfluoroalkyl substances, which are found in plastics. The new process, which they call ion-capture electrodialysis, also could potentially remove radioactive isotopes from nuclear power plant effluent.

A water municipality in the U.S. needed to address a chlorine disinfection system problem at one...

Oil and snack companies team up to reduce deforestation