It may sound like something out of a science fiction film - innovative artificial intelligence that interprets data and takes action - but through an industry-led project, Australia has opened the floodgates to intelligent rainwater tank systems.

Developed by iota, the commercial arm of South East Water, Talking Tanks monitors water levels in a rainwater tank and automatically releases water at a controlled rate if required. The system pre-empts the release of water from set points that are chosen by the user, according to rain or storm predictions which are received via a communications link to the Bureau of Meteorology.

“Stormwater can increase the risk of overflow into urban waterways and, in some cases, carry litter and pollutants or cause erosion,” explained iota Business Development Manager Adrian Blinman.

“The system automatically releases water, creates storage capacity and prevents overflows of stormwater. With unique self-learning, these intelligent systems are paving the way forward for efficient management of rainwater tanks.

“Customers are able to preset the required tank water levels and control this remotely through the use of an internet connection or even a smartphone, taking the guesswork out of rainwater management.”

As varying roof and tank combinations react differently to the volume and intensity of a downpour, the software has been designed to learn and self-correct following each rain event. An advanced algorithm was developed to analyse how successful the capture of rainwater was and adjust accordingly for future events.

“With this intelligent technology on board, users can limit the possibility of stormwater overflows and flooding,” said Blinman. “If rainfall is expected, Talking Tanks will anticipate that draining is required to provide new capacity to capture and hold the incoming stormwater.”

Rainwater tanks have become a valuable tool for the catchment and re-use of rainwater, but the tanks also aid in the reduction of the impact of stormwater on drainage infrastructure, roads, urban streams and beaches.

“The application of Talking Tanks on a large scale is an effective measure in prolonging the life of existing stormwater infrastructure or minimising the impact of peak flows on natural waterways that form an integral part of a stormwater network.” 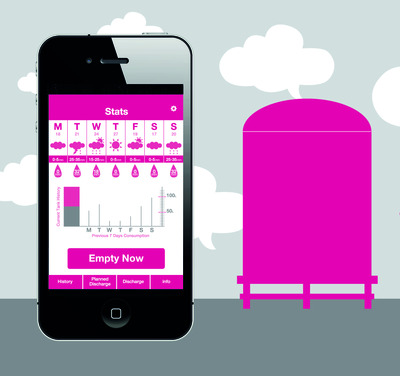 The advancement of the Talking Tanks technology was sparked by Dobson’s Creek - a water body which runs through the peri-urban community of The Basin at the foot of the Dandenong Ranges. The creek has the highest ecological value within the municipality, but its health is adversely impacted by stormwater flows that can carry litter and pollutants or cause erosion.

South East Water wanted to reduce the volumes and the speed with which stormwater enters Dobson’s Creek to help create a healthier environment. Along with Melbourne Water and Knox City Council, it aimed to reduce the proportion of surfaces that were directly connected to the creek to improve water quality. A system that could shorten these peak stormwater flows within a city environment without the need for huge retention basins was needed.

In order to ensure tanks were ready to receive rainwater runoff, they may have had to dump some or all of the water contained within them before the predicted rain event arrived. iota aimed to employ products and software that could monitor local weather data and react by a controlled release of water in the tank before the forecast rain event arrived.

A microprocessor linked to a solenoid valve on the tank’s outlet was used to manage the water held by the tank. These units were controlled by South East Water’s SCADA network to which they were linked via a telemetry unit. In addition, the telemetry would monitor local weather forecasts.

Adding complexity to the task, the residential rainwater tanks had dual and conflicting purposes:

The microprocessor was to only release sufficient water from the tank that would be necessary to capture the forecast rain. A smaller forecast rain event would not necessarily require all the water in the tank to be released. All combinations of roofs and tanks react differently to the volume and intensity of a rain event.

To account for this variation and to ensure the tank’s dual duties were achieved, the microprocessor’s software algorithm needed to learn and self-correct as it reacted to each rain event. The algorithm detects how successful the capture of rainwater was for each predicted rain event and whether it should change the volume needed in the tank for future, similar predicted rain events.

Monitoring the multiple tanks via South East Water’s SCADA system indicated that they were operating as intended, releasing water before forecast rain events and retaining the runoff during the storm - effectively reducing the peak flow. Following the project’s success, the technology can now provide similar benefits to other users throughout Australia.

2021 is expected to be a year of opportunity for those who are ready to embrace digital...