Coping with drought and water restrictions 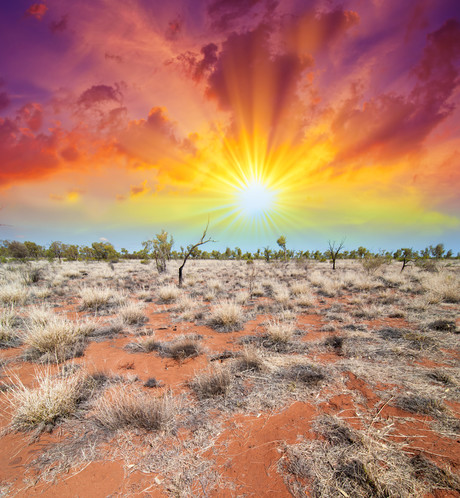 Turning on a tap to get a glass of clean and safe water is something that households in the modern cities of Australia and globally have taken for granted for decades.

The current water crisis in Cape Town, a major city of South Africa, has placed the automatic right of receiving drinking water higher up our state of consciousness than it normally would.

The millennium drought affected most of southern Australia from late 1996 to mid-2010. The water reserves for Sydney received a reprieve between 1997 and 2000 where close to average rainfall returned and storage levels rose. Coincidentally, during this period a new regulatory framework was introduced by Sydney Water’s regulator, the Independent Pricing and Regulatory Tribunal, or IPART, during its regular 4-yearly pricing review process.

The regulation required Sydney Water to demonstrate efficient allocation of resources to manage demand, but provided sufficient flexibility for Sydney Water to develop its own program of delivery. Annual reporting requirements were also included and the rigour of these increased dramatically as the millennium drought began to take hold once again in Sydney, which led again to declining storage levels amid an increasing population. Storage levels ultimately dropped to below 40% in June 2005, a point where the decision to build additional supply sources was made.

By 2002 the drought was having a significant impact on Sydney. Storage levels were at 70% but were to drop to 40% by 2005. Increasingly more demanding water restrictions were imposed from November 2002 through to June 2009. These focused primarily on outdoor and garden water use, and as they became more severe, businesses were also required to contain their use of water outdoors for washing and cleaning activities. During this time there was significant growth in expenditure on water efficiency programs, recycled water projects, regulatory changes and the investigation of alternative water sources.

The most significant aspect of the Demand Management Regulation was that it allowed Sydney Water to recover the cost of its demand management activities through water price negotiations with IPART. These negotiations proved that Sydney Water’s expenditure was efficient.

The fact that the regulatory mechanism was instigated very early, in what was to become a long-term drought, enabled Sydney Water to test a wide range of initiatives, rank them in order of the cost/kilolitres of water saved and then to increase the scale of the more promising projects. As positive data was gathered and the evidence base of successes was reported, a diverse and growing portfolio of programs were endorsed by key stakeholders. This iterative process engaged the community and built confidence. A solid foundation consisting of a broad portfolio of effective and scalable demand management activities was developed within 2 years and these continued to expand through to 2011 when, finally, above average rainfalls restored storage levels to 100%.

What is pleasing is that the behavioural changes created by water restrictions and waterwise rules introduced during the millennium drought have been maintained and water consumption in total across Sydney, and also on a per capita basis, has remained at low levels despite an increase in Sydney’s population of over 1 million people. 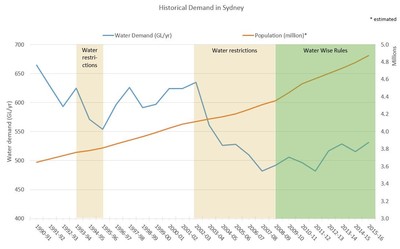 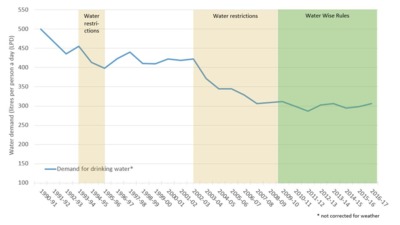 Figure 2. Total water use per person per day (excluding recycled water), not corrected for weather impacts.

The primary contrasts between Sydney’s drought experience and South Africa’s appear to be related to the advanced planning advantage Sydney Water had because of its Demand Management Regulation and the subsequent financial support for program development and delivery that it enabled.

In Cape Town the agriculture sector uses 30% of total water supplies and they receive subsidised water that during the current drought hasn’t been exposed to restrictions. This is in contrast to the residential sector, which has been increasingly forced to comply with extreme restrictions on water use.

Cape Town is a significantly less developed economy compared with Sydney with GPD per capita of US$15,918 compared to Sydney’s per capita GPD of US$62,340. The need to provide essential water supplies below cost to vulnerable communities is significant while there is a reluctance to negatively impact the intertwined agricultural and tourism sectors that drive significant economic growth in the region.

The water sector in Cape Town is regulated directly by the government, whereas in Sydney, IPART is an independent organisation that isn’t directly influenced by political pressure. There are clearly resource constraints within the Cape Town Water and Sanitation Authority as it is suffering from reduced sales and increased costs of supply. The drought in South Africa comes at a time when the accelerating impacts of climate change are making historical experiences significantly less relevant than a decade ago. There has been little time for Cape Town to adapt.

Sydney is well placed to manage demand and respond to short- and longer-term climate impacts amid a steadily growing population. Sydney Water works closely with stakeholders across the water sector to understand both water demand and supply options to secure water supplies that are affordable and resilient to respond to the population growth and climate change.